NASA – the US space agency that announced the discovery of flowing water on Mars this week – has chosen a winner in its contest to design proposals for 3D-printed housing on the red planet (+ slideshow).

The Ice House has been awarded first place in the NASA-run 3D Printed Habitat Challenge, receiving a prize of $25,000 (£16,500) from competition sponsors NASA and America Makes – the country's national additive-manufacturing innovation institute.

Entrants to the competition were asked to design a base for four astronauts by using 3D printing techniques and materials indigenous to Mars.

Ice House was one of the few entries not to make use of regolith – the loose soil and rocks found on the surface of the red planet – instead opting for a shell of ice "capable of protecting the interior habitat from radiation while celebrating life above ground."

The concept proposes using Mars' water supply, thought only to exist in the form of ice until earlier this week. It features a pair of pods formed from ice and placed one inside the other to insulate inhabitants from Mars' inhospitable climate – which can range from a temperate 20 degrees celsius to minus 150 degrees celsius. 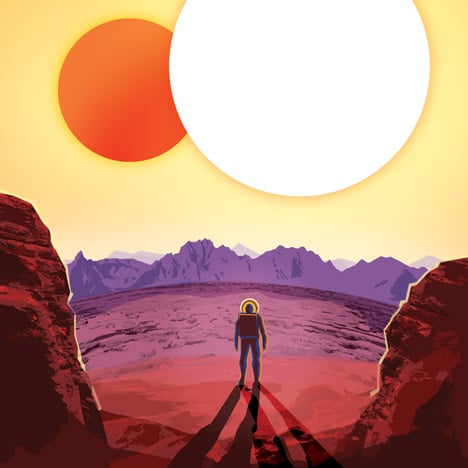 10 designs for the future of space travel

The absorption spectrum of water could mitigate ultraviolet solar and galactic gamma radiation, while allowing light into the interior, according to the architects.

"Recognising that water is the building block to life, the team used a 'follow the water' approach to conceptualise, site and construct their design," said Clouds AO and SEArch.

"Ice House was born from the imperative to bring light and a connection to the outdoors into the vocabulary of Martian architecture."

The team saw off competition from London firm Foster + Partners, which proposed a robot-built structure made from regolith – the loose soil and rocks found on the surface of the red planet. Foster's concept was named runner up from a shortlist of 30 proposals for the competition, which received over 160 entries.

Also among the shortlisted projects were designs by the European Space Agency and French 3D-printing company Fabulous, which proposed a bubble-shaped habitat built from iron oxide and insulated by a water-filled cavity wall.

NASA first announced it was developing a 3D printing factory in space in 2013, and a year later confirmed it had printed its first object on the International Space Station "paving the way to future long-term space expeditions".

At the beginning of 2015 the American space agency revealed its plans to use drones to explore Mars, helping to map the terrain for rover vehicle expeditions.

SEArch studio has a long-term collaboration with Human Factors division at NASA's Johnson Space Center, carrying out both teaching and research projects on space exploration at Columbia University and the Pratt Institute.

Clouds AO has previously worked on concepts for a space elevator and a proposal to harness the power of comets for interplanetary transportation, while terrestrial projects have included a yoga studio with curved walls to confuse perception of space.