The Juno's House project was originally intended to be a "modest refurbishment", but on discovering the house had been poorly constructed the studio planned a more extensive renovation.

"Upon these difficult and unforeseen circumstances, the new proposal was based on exploiting the potential of new possibilities," said Nook, which recently moved into a self-designed co-working space in the city.

"This was no longer a conventional, two-level home, but a project to be drawn on a blank piece of paper," it added.

The homeowners wanted an "open, luminous and functional" interior, with rooms left connected to one another.

"Instead of segregating the spaces between two simple levels, we placed the light staircase cross-wise to the main length of the plot and dislocated the section by misaligning the slabs and generating middle floors that allowed the light to flood in all the way to the back," said the studio.

This also allowed Nook to place a bedroom mid-way up, letting the house owners keep an eye on their baby from the mezzanine top bedroom.

The main living space and kitchen take up a single room, featuring a blue tiled wall and polka dot hexagonal flooring. Wooden floorboards are echoed by the use of minimal wooden furniture, including a dining table and side table.

The entrance to the 130-square-metre house is down a narrow hallway, so the studio made the most of the natural light from the patio doors. Nook also added two skylights to bring in additional light, which is filtered through the mesh panels that surround the upper bedroom and staircase.

A grass-covered balcony extends from the first level of the house, which also features a staircase that extends into a padded reading nook and wall-to-floor bookcase. 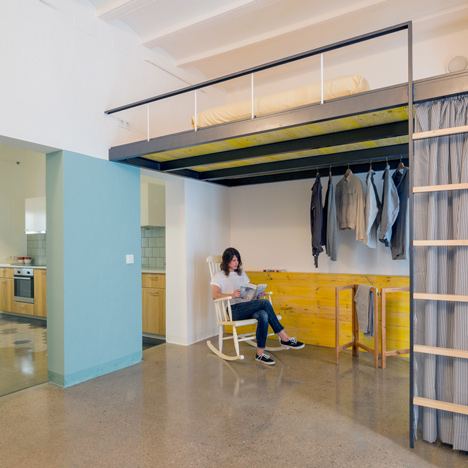 "On this house we wanted to reflect the honesty of its material, choosing the upmost comfort without the need of secondary cladding materials," said Nook Architects.

"The floor slabs are left bare, merely painted, the volume on which the staircase is supported is finished with exposed stucco and the wooden panels meant to be used for shuttering act as a slab for the mezzanine level and are left with their original finishing," it added.

The studio has completed several residential projects in Barcelona, including an apartment divided by sliding wooden partitions, and a flat with built-in storage arranged around arched doorways.