LA-based Optimist Design has completed a recording studio in Berlin for Red Bull, marking the latest addition to the energy drink company's network of music venues around the globe (+ slideshow).

The studio is housed within a 7.5-metre-high, copper-clad volume that was inserted into an old power station built in the 1920s.

"[We] ensured the space was Berlin-specific by keeping the interior's industrial feel and creating a series of sculptural rooms within the existing walls."

Encompassing 300 square metres, the asymmetrical volume contains a series of chambers, including a main recording room, two mixing studios, a lounge and kitchenette.

The design team utilised 3D drawings when it set out to conceive the space. "This pushed the boundaries of design and saved time during the initial stages," the firm said. 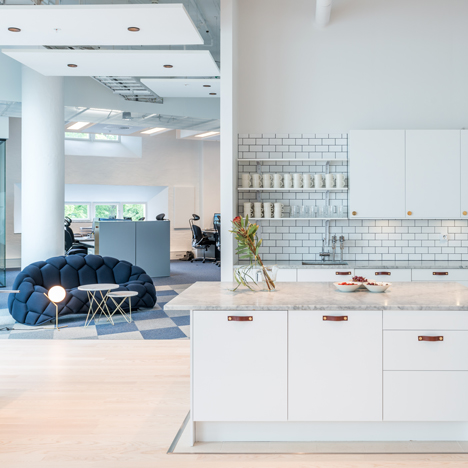 "The challenge for the design included ensuring the high standards of technical and sound requirements but also creating a venue that looks good on camera," it added.

The structure's exterior is wrapped in one kilometres worth of copper strips, a material that references copper infrastructure within the old electricity plant. The aim was to convey a sense of "power and energy".

The resulting faceted form references the musical activities taking place within the volume. A large triangular skylight brings natural light down into the space.

"A visual rhythm has been created by forming the shape of the copper strips into an undulating sequence to represent the natural flow of sound and music," the design team.

A staircase connects the ground level to a mezzanine, where a lounge overlooks the recording spaces and control rooms below.

"We wanted to create views into the recording and control room from the shared spaces so people can watch and take photos of what is happening inside," the firm added.

"Working with technical sound and acoustics experts, the team incorporated the right absorption materials and surface and diffusion areas to support the perfect sound platform," said the team.

Acoustics were central to the project's design, but the firm sought to accommodate other concerns, too.

"Ultimately, music is about creation, but at the same time it is also about communication and the experience involved in the process," explained Tino Schaedler, founder of Optimist Design. "The space is platform to foster creativity, add spirit and make people feel comfortable."

"I used to play in a band when I was in high school and we recorded a few times in a studio, which was always a special time," he added. "Today, many musicians record at home on a computer, so being in a studio is something special for different reasons."

Red Bull now has 12 music studios in cities around the globe, including Tokyo, LA, Paris, London and São Paulo.

"Red Bull's revitalisation of the power station is the perfect metaphor for the resurgence of Berlin as a capital of ideas," said Michael Brown, design director for Optimist Design.

"The city's unused former industrial spaces, rendered obsolete by shifts in technology, provide a post-industrial canvas for the creative exploration of music, art and culture."

Other Red Bull projects include the company's Stockholm office designed by local studio PS Arkitektur and an arts centre in São Paulo by French-Brazilian studio Triptyque.