Australian architects Jackson Clements Burrows added perforated shutters to the exterior of this holiday cabin "like a Gore-Tex jacket", providing light and ventilation when closed (+ slideshow).

Melbourne-based architects Jackson Clements Burrows designed Moonlight Cabin as a holiday retreat on the far south-west coast of Victoria. It is owned by a family with two children, the father of whom grew up nearby.

"Now residing overseas, the cabin is an escape from the intensity of an urban environment, but in a landscape of familiarity for a parent who sees the land as an important historical connection," said the architects, whose other projects include a perforated brick house in Melbourne.

The cabin is clad with spotted gum – a durable and sustainable local timber that will age to a silvery grey – and features shutters so that the building can be opened up or closed down, depending on the weather.

"The climate is harsh, windswept, often misty with rain, and the cabin is a place to retreat from and engage with these ephemeral conditions," said the architects. "It has been designed to be adaptable, to partially shut down as its occupants require, to be secured when they leave, and reopened when they return." 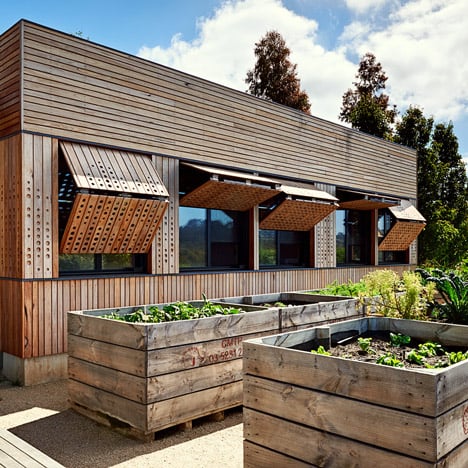 The architects liken the external timber rainscreen and shutters – which are raised slightly off the building's surface to create a ventilated and moisture-resistant gap – to the breathable fabric of a Gore-Tex jacket.

"Like a Gore-Tex jacket, the house is protected from the elements while the timber is free to expand and contract in the always-changing climatic conditions," they said.

The interior of the 60-square-metre cabin has a timber pod in the middle, with various spaces built into its periphery. These include a kitchen, dining bench and U-shaped seating nook at one end, a bathroom at the other end, and two bedrooms in the centre – one with bunks for the children.

Sliding doors allow the bedrooms to be closed off from the living space, and the U-shaped seating nook can also double as a guest bed.

"No space is wasted – it is as efficient as possible," said the architects, who cite Le Corbusier's Cabanon as an inspiration.

"The small footprint explores the boundaries of how small is too small; when something is small and when requirements are minimal, there is always the ability to challenge ourselves about what is actually necessary in our lives," they added.

The coast of Victoria in Australia is dotted with a number of striking homes, including a zinc-clad house with a central wind-sheltered courtyard and a timber home raised off the ground to capture the best views of the ocean.

Local Victorian ash wood has been used for the interior of Moonlight Cabin, which was completed on-site in approximately nine months.

In the future, the architects say a new house may be built on the site, with the cabin used as a guesthouse.

"There are plans to build a bigger house later," architect Tim Jackson told Dezeen. "This was a way of getting a sense of understanding of the site and its conditions."

Photography is by Jeremy Weihrauch of Gollings Studio.