To create a feeling of zen in this Amsterdam hotel room, designer Hanna Maring added a Japanese wooden bathtub and semi-transparent screens designed to resemble the sky at different times of day (+ slideshow).

Bathing Bikou is one of nine unique suites at the new Volkshotel in Amsterdam, each conceived by a different designer.

Although most rooms within the hotel offer vast views of the city, the space given to Design Academy Eindhoven graduate Maring had only a relatively small window. In response she based her design around creating her own views.

"I designed several big sliding screens with semi-transparent prints that resemble the sky," she explained. "They allow for an open yet intimate atmosphere, and create different views within the space." 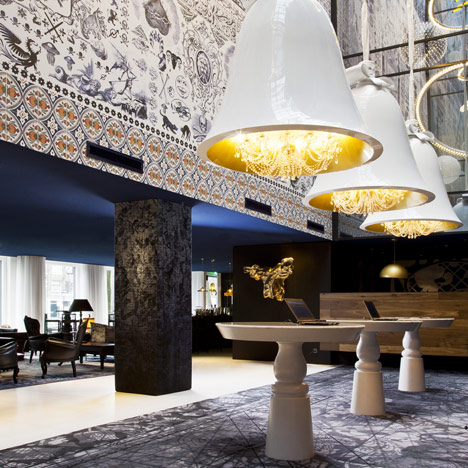 "In this way the hotel room merges the functions of sleeping, washing yourself and relaxing into one experience and one space," she told Dezeen.

To create the timber-framed screens, Maring printed a colourful gradient onto a semi-transparent textile, using a halftone process known as FM screening.

The design is intended to resemble the sky at dawn and dusk. At close range the dot pattern is clearly visible, while from afar the pattern merges into a seamless gradient.

"I blew up the dot sizes of a gradient processed through FM screening," said Maring. "This process translates images into micro dots that are placed randomly, as opposed to the usual grid system used for printing files."

"The gradients and colours resemble a view into the sky at different times during the day and stand in contrast to the often grey Dutch sky and the concrete dominated interior," she added.

The bath in the centre of the room is a traditional Japanese Ofuro made from cedar wood. Other recent projects featuring wooden tubs include a glass-coated house in Tokyo and a penthouse apartment in Kiev.

All furniture and interior elements throughout the rest of the room are constructed from plywood.

The Volkshotel opened in Amsterdam in 2014. It occupies a 1960s concrete building, and includes 172 rooms in total.

"The overall design of the hotel is informed by simple materials and detailing, to which unique and crafted finishes were applied to preserve the history of the building," she added.

Marin was initially invited by Professor Bas van Tol to be part of the creative team for the hotel. She was later tasked with creating a unique interior for one of the hotel's "special" rooms.

Other accommodation in the Dutch city includes a hotel within a library building by Marcel Wanders, and a suite complete with retractable staircases, ceiling-mounted gymnast's hoops and under-bed offices.

Photography is by Igrien Liu.