Four house-shaped blocks enclose a courtyard in the centre of this hilltop holiday home on the Danish coast by Lenschow & Pihlmann (+ slideshow).

The Danish studio chose this form to help give House at Mols Hill anonymity among the existing summer residences that overlook Denmark's Ebeltoft cove.

The 175-square-metre floor plan is fragmented into four smaller blocks with pitched roofs, allowing the building to mimic its neighbours. But large areas of glazing give it a more contemporary appearance, offering occupants views over the bay.

"The four pitched roofs blend in with the surrounding summerhouses and the closed facade with sliding shutters in front of the windows gives the house an anonymous outer appearance," said studio co-founders Kim Lenschow and Søren Pihlmann.

"The exterior of the house is modest – even slightly introverted – but entering the courtyard reveals a spatially open house with a warm pine wood interior," they added. 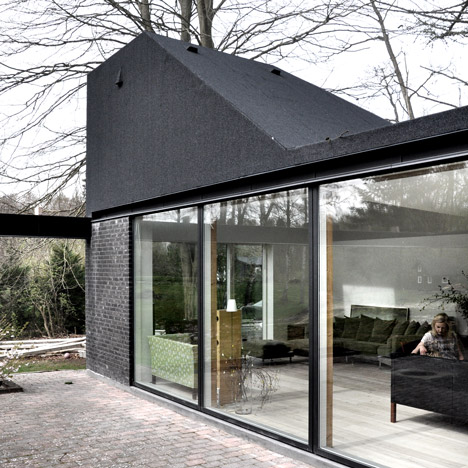 The gables and roof have a robust cladding of galvanised steel, zinc and wooden planks, while sliding shutters protect the glass from the strong coastal winds.

The four blocks serve loosely different functions: an entrance hall with a utility room and bathroom, a guest house, a living room and kitchen, and sleeping quarters for the family.

"Glass doors and sliding partitions ensures visual contact between rooms across the courtyard and also provides a clear and unhindered view over the bay," said Lenschow and Pihlmann.

The open-plan layout and glazed corridors connect the blocks, but sliding doors and curtains can be used to segment the space to suit small or larger parties.

Each block has access to outdoor areas, which are shielded by from view and the elements by bushes, as well as pine and fir trees.

Clusters of house-shaped blocks are frequently used to diminish the scale of buildings in natural settings. Norwegian studio Jarmund/Vigsnæs Architects recently split another Danish summer home into five buildings that appear "like a miniature village" and shelter a courtyard at the centre.

Photography is by Hampus Berndtson.