Petra Krausová – part of Lasvit's team of in-house designers – created the Cassia collection with an optical mould made from ribs of metal.

Bubbles of glass were blown into the mould, where the molten material was able to flow past the ribs and form bulbous shapes.

With this process, each of the pendants has a slightly different form. Krausová also used a variety of techniques to produce an assortment of finishes, which would be visible both with or without the light bulb illuminated inside.

"I wanted to introduce a lot of textures and techniques that can be created with the glass," she told Dezeen. 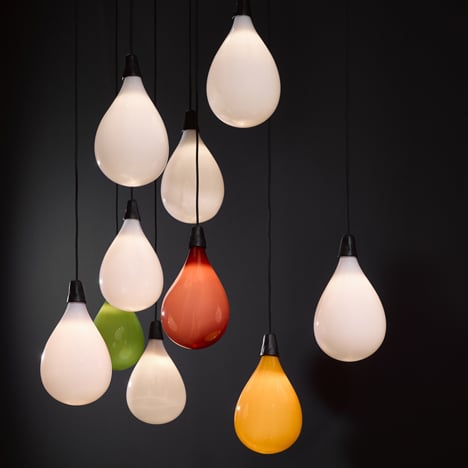 Some were sand-blasted to become translucent, others smoked and then cooled to form a cracked effect, and a few were hand-painted with a thin coating of platinum.

Krausová was asked to design the lights for an installation at this year's Maison&Objet trade fair in Paris.

She based her idea on the night sky, and programmed a cluster of the lamps to automatically glow and dim at different times to create a constellation of twinkling lights.

"I always wanted to do a dynamic lighting installation, because you can really play around with it," she said. "I took the inspiration from the night sky. I wanted to recreate the feeling of gently sparkling starlight."

To inform the arrangement, Krausová took a time-lapse video of the sky and sped it up, then pixellated the image and translated it into the layout of the installation.

"What you see is the real, natural movement of the starlight," she said.

The intention is for customers to chose how many pendants they want to use as a "bouquet" of lights in their homes or other spaces. For large groupings, Lasvit can customise a dynamic lighting effect.

A chandelier sprouting glass mushrooms and a range of designs coloured to look like sweets – both by the Camapana brothers – featured on the brand's stand as well.

The event took place at the Nord Villepinte exhibition centre from 22 to 26 January 2016.