Work starts this week on a huge bridge made up of 10 pairs of arches, designed by architect Michael Maltzan to replace the iconic Art-Deco Sixth Street Viaduct in Los Angeles (+ slideshow).

Demolition will begin on the existing bridge on 5 February, necessitating a 40-hour closure of the 101 Freeway.

The new elevated structure will feature a series of splayed arched trusses that will be illuminated at night. It will connect to a network of parks being developed alongside and underneath it.

Five staircases will allow pedestrians access at different points along the span, while a ramp at either end will provide accessibility for cyclists.

"The new Los Angeles Sixth Street Viaduct is a transformative infrastructure project for the city of Los Angeles," said LA-based Michael Maltzan Architecture, describing it as "more than a simple replacement thoroughfare". 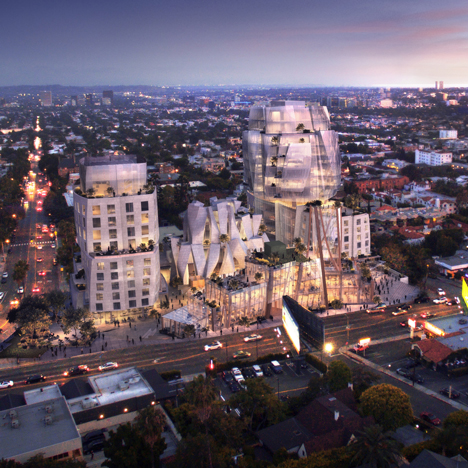 "The project foresees a multimodal future for the city, one that accommodates cars, incorporates significant new bicycle connections, and also increases connectivity for pedestrians to access the viaduct, not only at its endpoints, but along the entirety of the viaduct, linking the bridge, the Los Angeles River, and future urban landscapes in a more meaningful relationship," it said.

The existing Sixth Street Viaduct dates back to 1932 and has been featured in numerous films, particularly those revealing the city's underside, including Drive, The Dark Knight Rises, and To Live and Die in LA.

Though the old Art-Deco bridge is a landmark, it has badly deteriorated due to a chemical reaction known as Alkali Scilica Reaction, which is eroding its concrete piers. It also fails to meet current seismic standards.

"The design approach unifies and optimises the architecture of the viaduct through repetition, creating a unique configuration through the repeated use of arches, roadway and pier forms: an iconic structure," the firm added.

The LA River is currently a concrete channel, but is in the process of being redesigned with more natural edges as a park and recreation area, with Frank Gehry currently attached to the design team.

The Ribbon of Light is the latest in a string of major building projects in LA, helping to turn the city into a hotbed for design. Other examples include The Broad by Diller Scofidio + Renfro and the renovated Petersen Automotive Museum.

"The unwieldiness, the heterogeneity, the complexity here – all those things you might associate with dystopic urbanisms have made things like invention very possible. They’ve created a very open context," Maltzan told Dezeen.