This stack of mirrored boxes modelled on the biblical Tower of Babel is programmed to slowly rotate, reflecting changing views of the Iranian desert terrain and sky (+ movie).

According to the Old Testament, when humanity was united under one language they built a tower that rose up to the heavens. 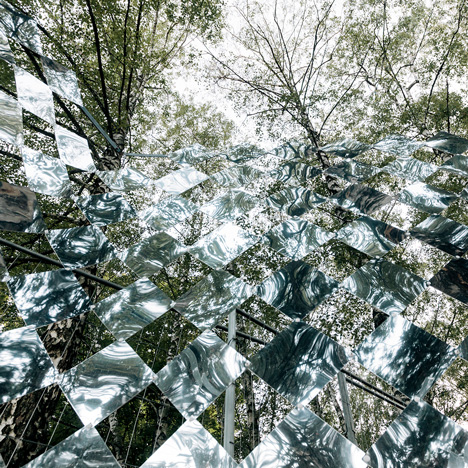 However, God feared they had too much power and freedom, so put a stop to the plans by muddling up people's speech into different languages and scattering them all over the world.

Using mirrors – a common material in Abedinirad's work – the duo formed a stepped pyramid and enabled each tier to rotate individually.

The stack was then programmed to rotate in various patterns and configurations. For example, each layer can spin slightly in turn or the whole tower can slowly contort into a twisted shape.

"The top view of the installation, by reflecting the sky, is connecting it to the earth, symbolising the aim of the Babel tower to reach for the heaven," said Abedinirad.

Sensors embedded inside also allow the structure's movements to become dependant on weather conditions. When installed in a city, it would also respond to interaction with an audience.

American artist Phillip K Smith III similarly used mirrors to reflect a desert landscape, adding panels to the walls of a shack in California to create the illusion that you can see right through the building.

The Tower of Babel story also influenced an installation by artist Barnaby Barford, who stacked 3,000 tiny shops made from bone china into a version of the biblical structure for the London Design Festival 2015.