Stockholm 2016: too many furniture brands don't understand the importance of good photographic styling and would benefit from hiring designers as art directors, says Jasper Morrison.

The British industrial designer believes that companies should call on designers to help create imagery that will catch a customer's eye, and to avoid "terrible" photography that can "sink a product".

"Most customers discover the furniture through magazines and websites like [Dezeen]," Morrison told Dezeen. "So it is really critical. I don't think many companies get that. You see the terrible shots they do."

"I would like to be more involved with presentation," he added. "It's really important. Bad photos will sink a product." 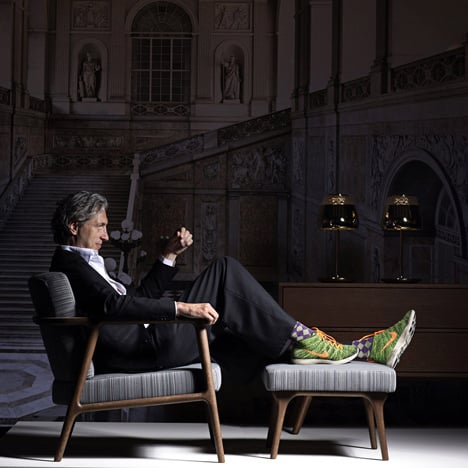 Morrison is considered one of the world's best industrial designers, and has created products for many renowned design brands. A retrospective exhibition of his work spanning four decades will open in Zurich this week.

Morrison spoke to Dezeen at this week's Stockholm Furniture Fair, where he is launching a collection for Danish brand Fredericia. He also designed the display stand for the brand, creating a workshop-style floor using ash wood blocks arranged so their end grain faces up. The blocks are mounted onto panels, so the pieces can be lifted out and reused.

"This floor [of the Fredericia stand] for example, cost a fortune," Morrison said. "The idea is that we can use it for photography and for shoots to create a common identity for [the brand]."

A few furniture and homeware brands have already appointed designers as art or creative directors to unify their collections, branding, showrooms and overall image – following a model that large product companies and the fashion industry have used for some time.

"We [designers] are pretty well suited to do the job," said Morrison. "It's a difficult job, I'm not sure I'd want to have complete responsibility for it. But to lend some advice is a good idea."

"Sometimes there's a resistance to that, because [brands] want their independence," he continued. "But I think a lot of companies could benefit from being a bit more directed."

"I think it has really strong of potential, if they control it well, to be a really important fair," he said. "Before Milan, it was all happening here. It's cyclical – a 50-year cycle."

"I don't think the Italians will go away, they're still very strong," he said. "But the Scandinavians seem to be picking up."