Architecture studio Haptic has won planning permission for a series of contemporary properties in a conservation area in London's Chelsea.

Described by developer Banda Property as "a stand-out architectural statement not often seen in the borough", the project will include a block of four flats that aim to combine traditional materials with modern detailing.

Comprising two one-bedroom flats and a pair of two-bedroom apartments, Rosemoor Studios will be located on Rosemoor Street – part of the Chelsea Conservation Area, which features properties dating back as far as 1830.

North-London-based Haptic planned the building as a "contemporary insertion into the historic townscape".

"We are committed to designing and delivering a contemporary piece of architecture that has a unique identity but is rigorous in its detail and materiality, thereby ensuring the quality that you would expect in the Royal Borough of Kensington & Chelsea," said Haptic co-director Scott Grady.

Like its more traditional neighbours on nearby Rawlings Street, the building will feature a precast stone base and pale brick walls, offering a visual distinction between the upper and lower storeys.

Stone-framed openings will puncture the brickwork, creating a gridded facade intended to be be "visually engaging", while metal windows and balustrade details will offer subtle contrasts.

This will be "in keeping with the grand architecture of both the [original] building and the surrounding area", according to the team, and will be located on Rawlings Street. 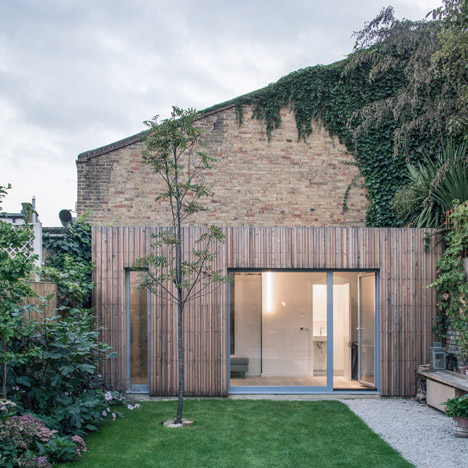 Other recent contemporary additions to Chelsea include a new-build house on one of the borough's oldest streets.

Rogers Stirk Harbour + Partners has had less luck in the area. His major housing scheme proposed for Chelsea Barracks back in 2009 was controversially dropped for being too contemporary, following an intervention from Prince Charles.

Haptic is led by Grady along with Tomas Stokke, Timo Haedrich and Nikki Butenschøn. Other new projects by the studio include a pair of larch-clad house extensions, a Scandinavian-inspired cafe, and an Oslo loft apartment.