Demonstration of the effect of thermochronic ink on a rose

Described by Bompas & Parr as "the world's first colour changing flowers", each of the blooms is hand painted with thermochromic ink – a substance that changes colour in response to fluctuations in temperature.

The studio is using two kinds of the ink to create different effects.

One set of flowers is treated with a liquid crystal dye that – at 27 degrees Celsius – changes from black to blue, passing through a number of other colours similar to those found on a beetle's shell.

"As you touch the petals the iridescent blooms go from black, to russet to champagne bottle green and then finally to a cerulean blue," studio co-founder Sam Bompas told Dezeen. "These flowers are sensual and luxuries, a deluxe, techno-enhanced model of what others will gift on Valentine's day."

The second set is treated with a black thermochromic dye that transforms at 31 degrees Celsius.

These plants are then sprayed with a "perfumed crystal elixir" before being burned. The heat triggers an effect that makes the flower's original colour reappear.

"The idea came to me in a lurid dream - a symphony of psychedelic blossoms," said Bompas. "There’s been so little innovation in the realm of floristry that it seemed like an area ripe for a creative odyssey."

"By combining technical dyes with traditional blooms and floriography (the archaic language of flowers) we've been able to create enchanting flowers that change as you heat them with your breath," he said. 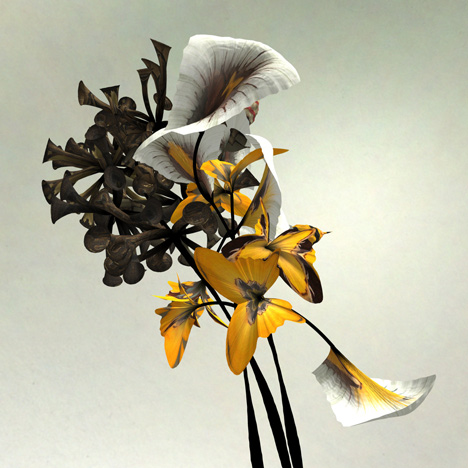 Bompas & Parr said the idea played on the use of flowers to show romantic intentions in the 19th century and the French fin-de-siècle's interest in decadence.

"In the 19th Century flowers could be used for otherwise unmentionable propositions; or to reject them," said the designers. "With the right combination of flowers it was possible to say almost anything without the need for words."

The stems will be sold at a pop up store created in collaboration with Champagne brand Perrier-Jouët named Fleurs des Rêves, in the basement of The London Edition hotel in Soho. The store will be open from 11 to 14 Feburary, and prices for the flowers will start at £30 a stem.

The studio will host workshops in the space to allow members of the public to create their own colour-changing roses, anemones and orchids. The fire-effect flowers will only be available to workshop participants.

"The most successful flowers are ultra-tropicals as their leaves are more robust," said Bompas. "And the ultimate flower for the liquid crystal flowers that change with the heat of your hand is the naturally black calla lilly."

The pop up is based on 1890s Parisian salons and huge greenhouses built by Perrier-Jouët in 1852, and includes video projections and bespoke lighting. Bompas & Parr described the design as "Gustave Moreau's [1876 painting] Salomé seen through a pulsating lenticular screen".

"The installation will also feature set design by Petra Storrs, perfumed crystal fluids infused with stones charged in the full moon including ouwarovite, black mica and cymophane, and a choreographed playlist that becomes more lurid, profane and psychedelic as the evening progresses," said the studio.

Bompas & Parr was founded in 2007 as a "craft jellymonger" by Sam Bompas and Harry Parr and attracted attention with its jelly moulds of famous buildings.

The studio has since focused on experimental food design and immersive "experiences" for brands. A project for Heinz baked beans combined food and music, and the studio has also developed glow-in-the-dark ice cream for Cornetto.

Previous thermochromic projects include clothes that change colour according to climate by Lauren Bowker, and a collection of homeware Design Academy Eindhoven graduate Penny Webb that transforms in response to breath, touch or movement.