London designer Alexander Taylor has made a prototype for customisable Adidas trainers based on an industrial sewing technique used to manufacture heated car seats (+ movie).

Futurecraft Tailored Fibre, Taylor's latest trainer design for the sportswear brand, features uppers made from a single piece of fabric, that can be customised for each wearer.

The shoes use an adapted version of an industrial sewing technique called tailored fibre. This allows different materials to be combined, forming one continuous surface with different strengths and properties.

It is more commonly used for electrical applications within the car and aerospace industries.

Taylor used the technology to create an embroidered upper material for the shoes with a yarn base and a thinner second fibre stitched on top to create support or rigidity.

Different patterns and paths, followed by the automated sewing machines used to create the uppers, can be programme specifically for the requirements of an individual wearer. The designer said this "results in a completely new aesthetic for performance footwear". 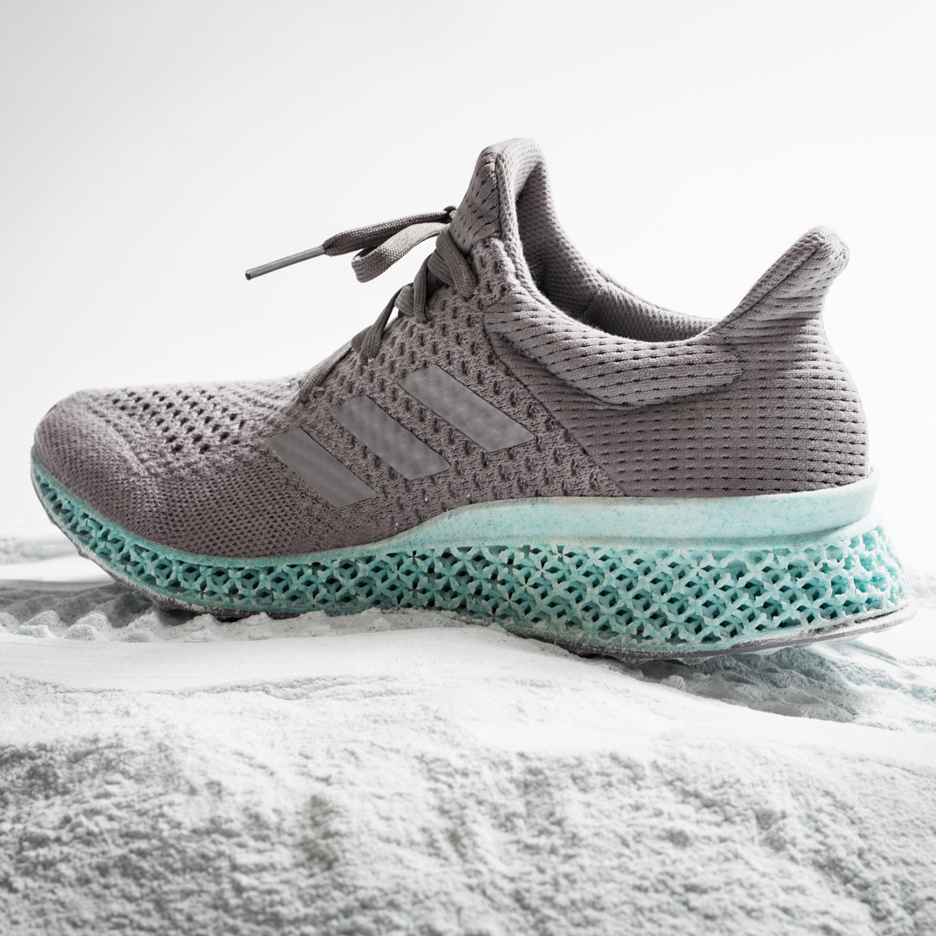 "Tailored Fibre is the first of its kind to use such technology for a complete upper," he told Dezeen. "It allows for a free orientation of fibres to achieve flexibility and rigidity in specific areas of the shoe, all in one single process, offering a new level of customisation."

"The highest-performance fibres and filaments are engineered, adding to the textile toolbox accessible to the brand," he added.

Taylor – who previously worked with Adidas to develop a Superstar trainer with a seamless leather upper – initiated the project two years ago while aiming to find and propose new manufacturing alternatives.

"We presented the first prototype using electrical wire usually laid down to heat car seats," explained Taylor. "It was the only material available, but it proved a concept."

Tailored Fibre is the third addition to Adidas' Futurecraft series, which aims to explore new ideas for the future of sportswear through material and process innovations.

Previous outcomes have included a 3D-printed shoe sole that can be tailored to the exact contours of the wearer's feet.

The sole can be combined with an upper made using waste plastic filtered out of the oceans to create eco-friendly trainers.

Taylor has worked with Adidas as a consultant since 2008, when he was involved in the development of the Primeknit trainers for the 2012 London Olympics – a technology that is now used to produce millions of pairs of shoes each year.

Speaking to Dezeen last year, Adidas executive board member for global brands Eric Liedtke said that the compant aims to use design to challenge its arch-rival Nike as the dominant brand in the American market.

Adidas' other recent innovations include a shoe that combines a knitted upper with a midsole made using a plastic foam cushioning material.