Dutch organisation What Design Can Do has launched an international competition to help find solutions for refugees facing a wide variety of challenges.

The What Design Can Do Refugee Challenge was announced today at the IKEA Democratic Design Days in Zürich, Switzerland, with Dezeen joining as media partner.

The UN Refugee Agency (UNHCR) and the IKEA Foundation, the philanthropic arm of the Swedish furniture giant that was behind the design of its flat-pack refugee shelters, are both supporting the competition.

According to statistics from the UNHCR, there are currently around 20 million refugees worldwide, with number steadily increasing.

Approximately 60 per cent are living in urban areas, creating a significant housing and infrastructure challenge for local and national governments, as well as for the refugees themselves.

"Daring and innovative ideas are needed to deal with the long-term needs of so many new residents in many areas of life," said What Design Can Do founder Richard van der Laken. "This is what designers are good at."

"The What Design Can Do Refugee Challenge is a global design competition that calls on the creative community to come up with game-changing ideas for accommodating, connecting, integrating and helping the personal development of refugees."

Designers are invited to submit ideas for the challenge up until 1 May 2016. Twenty-five will be shortlisted in the run up to What Design Can Do's annual conference in Amsterdam, which will take place from 30 June to 1 July 2016.

Refugee tents are a waste of money, says Alejandro Aravena

A jury will then select five finalists, with the list set to be revealed at the climax of the conference.

Each will receive €10,000 (approximately £7,800) and mentorship from established designers to help develop their idea for the rest of 2016.

More information on how to enter can be found at whatdesigncando.com/challenge, and ideas can be shared on social media using the tag #refugeechallenge.

Dezeen's editor-in-chief Marcus Fairs will also host a break out session during the Amsterdam event focused on design for refugees.

Van der Laken said that good examples of design for refugees could already be found in the IKEA Foundation's Better Shelter flat-pack project.

Another example is the German ICOON for Refugees, a dictionary of images with an app that helps refugees communicate quickly in a foreign language, designed by Gosia Warrink. 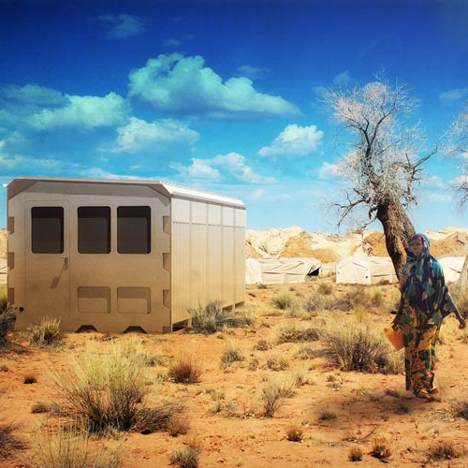 What Design Can Do was founded as an annual conference in 2010 to encourage debate among designers and promote projects that could help effect positive social change. Last year it launched its first event in Sao Paulo, Brazil.

"We started What Design Can Do to challenge designers to show their commitment," said van der Laken.

"Getting the WDCD Refugee Challenge off the ground with major partners like UNHCR and IKEA shows that the need for such commitment is also clearly felt in society. I know for certain that lots of designers are eager to contribute as best they can."