The Ron Arad Rocks! exhibition at the Louisa Guinness Gallery in London brings together old and new work from the Israeli designer, including his latest range of jewellery made from jagged pieces of silicone (+ slideshow).

The Rocks collection is made from slabs of silicone that have been hand-carved by Arad, and feature sections of patterned silk embedded inside. Earrings are made from single pieces, while necklaces feature several sections suspended alongside one another.

London-based designer's Naja series of pendants was also created for the exhibition. The necklaces are made from circular pieces of quartz that function as magnifying glasses, and are wrapped in bands of gold or silver.

The pendants take their name from a species of cobra that features monocle-like markings on the back of its hood.

Among the Naja collection, the Perfectly Coiled versions are handmade, but appear to have been created by a machine. The Free Hand pieces were drawn in pencil by Arad, then recreated by a goldsmith.

"I have always been inspired by Ron's work," said gallery owner Louisa Guinness. "I am astonished by his consistent ability to solve practical problems with simplicity, intelligence and aesthetic panache." 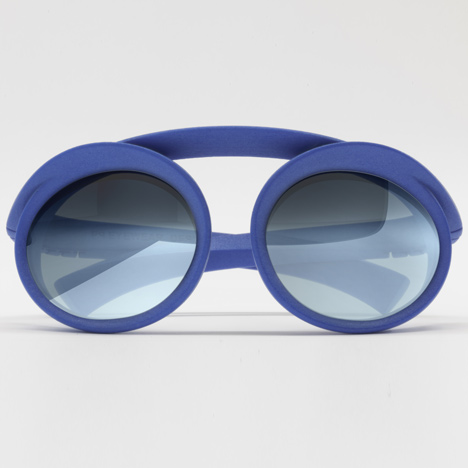 "Take Naja: not only beautiful and wearable but an ingenious solution to the middle aged drama of short sightedness," she added.

Arad's Hot Ingo designs – which date back to 2003 and were the designer's first venture into jewellery – are also on show.

The earrings are made from central bars of gold, platinum, silver or rhodium, with a section of 3D-printed polyamide wrapped around them that can be compressed into a small ball, or stretched out into a spiral.

In addition to jewellery, Arad has also worked on designs for a cancer treatment centre in Israel, furniture for Moroso and a range of 3D-printed eyewear.

The designer recently highlighted the opportunity and necessity for architects to make a difference in the world, by working on conflict areas such as the West Bank.

The Ron Arad Rocks! exhibition opens on 24 February 2016 and continues until 8 April 2016 at the Louisa Guinness Gallery, 45 Conduit Street, London.