Despite creating highly collectable artworks and designing best-selling products, Ron Arad says he has never pursued commercial success in the latest talk as part of our ongoing partnership with Friedman Benda for VDF.

This interview features British-Israeli designer Arad, who rose to prominence in the 1980s by turning found objects into highly valuable collectors' pieces, such as his iconic Rover Chair.

He went on to design a number of extremely successful mass-produced products for major brands, such as the Tom Vac chair for Vitra and the Bookworm bookshelf for Kartell. 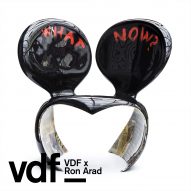 However, Arad rejected Adamson's suggestion that he was a shrewd businessman.

"Ettore Sottsass has a really nice quote," Arad continued. "He said: 'Money is very jealous, if you ignore it, it will run up to you.'"

According to Arad, his prolific output and the range of his work is due to a lack of focus, rather than entrepreneurial ambition.

During the talk, Arad presented a number of key projects from throughout his career, including the Rover chair from 1981, which combines a car seat he found in scrapyard with a curved tubular steel frame made from a milking stall.

"It's scaffolding, slightly more refined," said Arad. "I took that and I made a living out of it before I knew what I was doing."

According to Arad, misinterpretations about him and his work have helped boost his career. He gives the example of his Concrete Stereo project from 1983, which features a cast concrete turntable, amplifier and speakers that have been chipped away to reveal the electronics inside.

"I thought I was showing beauty where it is normally hidden," he said. "I didn't think I was doing anything destructive, but the French called my style 'ruinism'."

Despite not being his intention, he says that the idea of him as a ruinist led to him being invited to take part in the Centre Pompidou's 10th-anniversary exhibition in 1986, titled Nouvelles Tendances.

"They took it to be tortured by a digger"

In the video, Arad also presented his 2013 project Pressed Flowers, which comprises a series of Fiat 500 cars that have been flattened by a pneumatic metal press. The pieces were presented at Design Museum Holon at an exhibition called In Reverse.

Arad insisted that he was not destroying the cars, but rather "immortalising them", showing a series of videos documenting numerous failed attempts to flatten the cars – including by running them over with a digger – which he rejected for being too destructive.

"Without even asking me, they [his fabricator] took it to be tortured by a digger," he said. "That's not what I wanted to do. I am not a ruinist!" 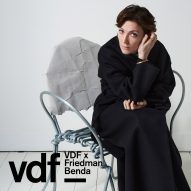 Eventually, Arad found a metal press at a shipyard in the Netherlands, which was strong enough to crush the cars smoothly and make them as flat as he envisioned.

"I went to my garage and told them what I wanted to do and they started crying," he recalled. "And I said: 'Listen, I am not destroying the cars, I am immortalising them'. And they understood and they prepared all these cars for me."

"We took them to Holland, to a shipbuilder. And we took them to a metal manipulating press. It took half a year to arrive there, but we pressed six cars in a day."

Arad also revealed that the project led to the Italian automotive giant approaching him to design its stand for the 2014 Paris Motor Show, another example of how he claims to have stumbled upon commercial success without looking for it.

"It's funny, Fiat was an amazing collaborator," Arad said. "I crushed the cars and later they asked me to design their motor show in Paris."

Arad's conversation with Adamson is the third in a series of Friedman Benda's Design in Dialogue talks we are broadcasting as part of Virtual Design Festival.

Last month, as part of VDF, Arad launched a new series of sculptural chairs, which were originally supposed to be exhibited at the OTI Gallery in Los Angeles before the show was cancelled due to the coronavirus pandemic.

Arad also took part in a live interview with Dezeen's editor-in-chief Marcus Fairs, in which he revealed a series of masks featuring portraits of famous artists that will be sold to raise money for the UK's National Health Service.