Both levels of this holiday house on Spain's Costa Brava feature rooms that can be completely opened out to the elements, allowing residents to make the most of good weather (+ slideshow).

Designed by Barcelona studio H Arquitectes, Casa 1217 is a private retreat for a couple in the seaside town of L'Escala.

The clients wanted to take advantage of their scenic location, so requested a two-storey house with numerous porches, offering views out towards the Pení Mountain and Cap de Creus – a peninsula at the eastern foothills of the Pyrenees.

H Arquitectes took this one step further, and designed a building where half of each level functions as either an indoor or an outdoor space – one facing east towards the view, and one directed south towards the sun.

A flat rectangular site made it possible to give the house a square-shaped plan. On each level, a cuboidal "box" houses the more private rooms, while living spaces occupy the inside-outside spaces, which are flanked by sliding window walls.

"To respond to the comfortable programme of the house, half of the area of each floor is occupied by a lightweight box," explained the architects, whose previous projects include a brick courtyard house near Barcelona.

"These two boxes are placed in opposite directions on each floor to establish an optimal relation with the exterior space," they said.

On the ground floor, the box is located along the northern edge, accommodating a large kitchen and dining space, a guest bedroom, and a compact toilet and shower room. The rest of the floor functions as a living space.

Upstairs, the box runs along the western wall to create two large en-suite bedrooms. The rest of the floor is a work and play space offering panoramic views towards the coastline. 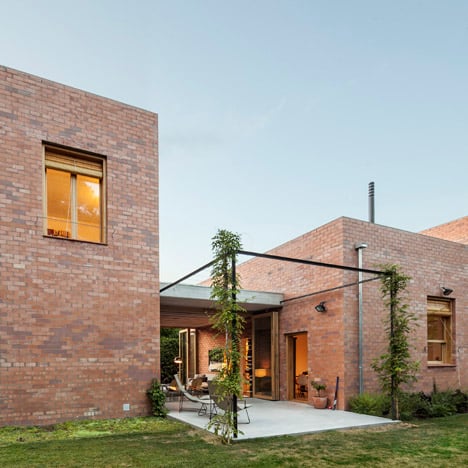 "This space will be used as a balcony in summer and as a study in winter," said the architects.

The house has a concrete structure, which is revealed on the building's exterior as a grid of projecting floorplates and chunky columns.

Walls were constructed using oriented strand board and plasterboard panels, while concrete boards clad the boxes.

Electrical fittings and piping are all concealed within the walls, leaving the interior surfaces as clean as possible.

Curtains can be drawn across all of the glazed walls to prevent too much heat escaping when the house is unoccupied.

A wood-burning stove and air-sourced heat pump have also been installed so that the house can quickly warmed when the occupants arrive.

Plants and bushes were added around the site's perimeter to screen the house from its immediate surroundings.

H Arquitectes is led by architects David Lorente, Josep Ricart, Xavier Ros and Roger Tudó. Other projects by the studio include a triangular brick house and a stone-clad apartment block.

Photography is by Adrià Goula.