Wooden partitions with arch-shaped cutouts are used to separate the workspaces from an indoor "courtyard" inside fashion brand H&M's logistics office in Taiwan.

The office on the outskirts of Taipei city is occupied by the Swedish company's finance and logistics departments.

Aiming to accommodate the different needs of each team, Taiwanese studio JC Architecture created two separate workspaces, which are connected by a communal area.

"The biggest challenge was to create two separate workspaces, with one being secured for the finance department, though maintaining a connectivity and sense of togetherness between the spaces," said the architects. 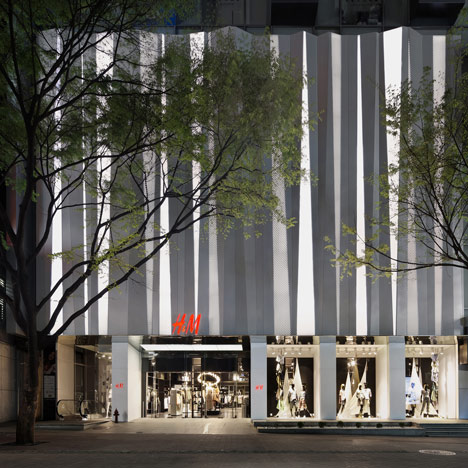 "Given the large column span and high ceilings of the site, juxtaposed with the surrounding landscape, we decided to explore the idea of openness versus private," they added. "We created a space that promoted creativity, personalisation and collaboration while playing a role between the interior and exterior."

Offices and workstations for both teams are located in the "cloister area", which is an L-shape hall enclosed by wooden partitions with arch-shaped cutouts.

Staff members are also welcome to work in the "courtyard", which also contains a cafe and larger tables for informal meetings.

Areas in the office are also marked out by flooring. In the communal courtyard, poured concrete is intended to give an outdoor atmosphere. But in the workspaces, patterned carpet tiles give a "warm, textural feel".

"The open space with kitchen, garden and casual seating became the pivotal point where people come to meet, relax, work or enjoy a meal together," JC Architecture said.

"By creating the layout in a human-scale approach, with small groups and breathing spaces throughout, we provide the required privacy setting while maintaining a neutral hierarchy environment."

"Both departments have a consistent warm, textural feel, as belonging to one continuous environment," the studio added.

JC Architecture was founded by Johnny Chiu in Taiwan, and has previously designed a glass house-shaped facade for a cupcake shop named Les Bebes Cupcakery.

Other offices for clothing brands include the OMA-designed Amsterdam headquarters for G-Star Raw and the west London base of Net-A-Porter by Studiofibre.