Four terraces are concealed behind the multi-tonal stone facade of this house in Kuwait – the Arab state with an impressive legacy of Modern architecture (+ slideshow).

Designed by local studio AGi Architects – whose previous projects include a home that produces its own mist – Wall House provides a home for a family in Khaldiya, a suburb of Kuwait City.

Like many houses in the city, the building is designed to provide as much privacy for residents as possible. As such, it has a near-windowless facade, punctured by only a few deep openings.

The property brings in natural light through voids in the roof.

This arrangement made it possible for AGi to create four separate roof patios, which can be used for a variety of functions, including dining, lounging and growing plants.

Externally, the building is entirely clad with stone – a popular choice for Kuwait houses, including a recent example by Massive Order and an earlier AGi project. 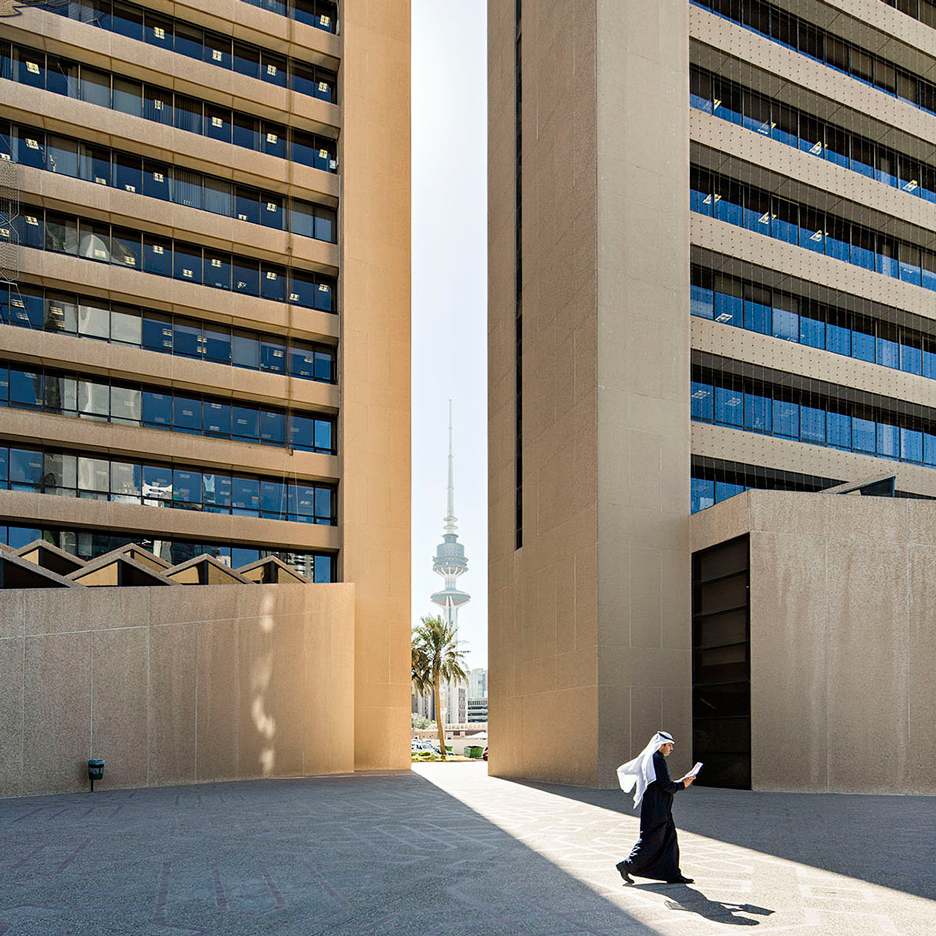 "Wall House is the physical expression of a family's life, a large shell protecting everyone that inhabits it," said the design team, which is led by architects Joaquín Pérez-Goicoechea and Nasser B Abulhasan.

"This shell embraces four patios which are developed three dimensionally," they added. "It allows the inhabitants to enjoy infinite freedoms internally."

Inside, the 2,500-square-metre building is divided into three storeys.

The lower level provides a residence for the client couple, the uppermost floor is occupied by their three daughters, and the middle level accommodates communal family spaces.

The voids in the floors provide visual connections between storeys, and also allowed the architects to create small plant-filled courtyards on the ground floor.

There are two living rooms on the middle level – one for entertaining guests and one used more exclusively by the clients.

"Away from any uncomfortable view, the family shares their own private luminous oasis," said AGi.

On the uppermost level, the living space used by the three daughters features its own kitchen area, which can be screened behind wooden panels when not in use.

Three of the four patios are located on this floor, with the fourth set a level below.

"The three daughters can develop their private life around three patios in the highest level of the house," said the architects.

"Cantilevered terraces and gardens are protected by shade, just as in an oasis in the desert," they added. "Vegetation and greenery are able to grow and climb freely on all the different levels."

Kuwait has become a surprising hub of contemporary architecture, thanks a period of prosperity between the 1940s and 1980s that instigated numerous building projects.

Other recent projects in the Arab state include an apartment block with a zigzagging facade and a boxing club. OMA is currently working on plans for a new department store, while Foster + Partners has designed a new airport terminal.