Photo essay: a shark in a corridor and a toad seated on a filing cabinet are among the scenes found by Austrian photographer Klaus Pichler when he went backstage at the Natural History Museum Vienna (+ slideshow).

Pichler spent four years exploring the non-public spaces of the museum, which boasts a collection of over 30 million objects. During this time, he found an assortment of surreal scenes, created when exhibits had been stored in unusual places.

His photography series, titled Skeletons in the Closet, reveals some of these findings. Jim Stephenson spoke to Pichler to find out the story behind the project.

Museums are not just exhibition spaces for the public. Historically, a key function of these buildings was to provide space to sort and to classify. As such, they often house expansive research and development spaces, storage depots and administrative offices, which are frequently vast in scale. In the case of the Natural History Museum Vienna, around 80 per cent of its 45,000 square metres of floor space is not open to the public.

While walking through Vienna one evening, a chance glimpse through a window led Klaus Pichler on a four-year photographic documentation of the museum's backstage spaces. Through the window, he saw a seemingly normal office with the lights still on. The office contained all that you might expect, with the addition of a stuffed adult antelope in the corner.

"This view left me thinking about what the backstage rooms of the museum, the areas which are not accessible for the public, might look like," he explained.

The office contained all that you might expect, with the addition of a stuffed adult antelope

Away from the public, these rooms and hallways exist in a state of limbo. Over time they have become busier and busier, and so the architecture becomes a framework for a series of surreal scenes where exhibits are left on sofas, in halls, behind desks and wherever else space can be found, before they are moved on to their next destination. 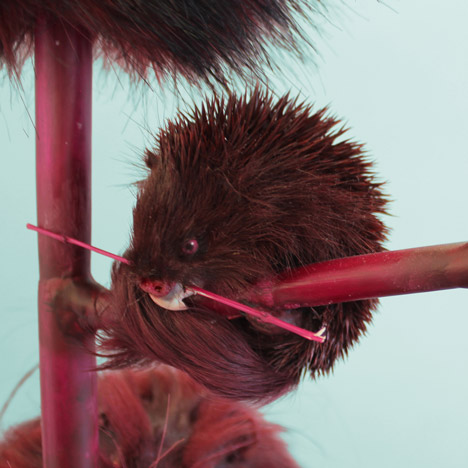 "In some ways I was surprised at the plainness of the backstage architecture, compared to the grandness of the museum," said Pichler. "The spatial aspect of the museum is quite confusing – so from the start I tried to get hold of floor plans."

What Pichler found was that the museum is organised around two rectangular yards. There is an inner and an outer ring of rooms around these yards, each with a different use: the outer ring hosts the public exhibition rooms, while the inner ring contains scientific rooms, each dedicated to the discipline of the accompanying public spaces.

"I was impressed by the sheer dimensions of the non-public spaces," said the photographer. "The spaces are in a constant state of change. Exhibits are lent to and returned from other museums and exhibitions, new exhibits are acquired, some are needed at special places because there are students or scientists researching them, and so on."

"The museum is, in effect, a living organism guided by its architecture."

It became apparent that, because of the lack of storage space, exhibits were arranged in the most space-saving way possible. Any gaps would quickly be filled with new specimens.

"This use of space played an important role for me, because there were good chances that I would find new arrangements on each visit I made," said Pichler.

Exhibits were arranged in the most space-saving way possible

Pichler spent almost four years wandering the backstage corridors and rooms, and his joy at a new discovery never waned. One of his favourite finds was a trio of neanderthals seated around a table.

"This was a funny coincidence and one of the still lifes which only lasted a few days," he explained. "There had been a special exhibition in the museum, focusing on prehistoric ages. When it was over, the three neanderthals were already reserved to be transported to a different exhibition outside the museum two weeks later."

Because of this, the museum staff had chosen not to transport the figures down to the basement, where they are regularly stored, and instead looked for a more convenient spot to keep them temporarily.

"Since there is this door-to-door situation between the exhibition rooms and the scientific spaces, the closest spot nearby that had space and was suitable for storing the figures was the department director's office, in particular, the tea lounge," said Pichler. "Of course, I was very happy when I encountered this scene because it looks both so grotesque yet so ordinary."

Remarkably, none of the scenes were deliberately staged for a photo opportunity

Pichler's deadpan style of photography helps to exaggerate the absurd nature of some of the scenes he found. Remarkably, none of the scenes were deliberately staged for a photo opportunity.

“Every photo is a depiction of a scenery I found as is," he said. "I was not been allowed to touch any exhibits – some of them are historic exhibits, more than 100 years old, and therefore both very sensitive and very precious."

"I also think it would have been too easy just to stage the scenes," he added. "It was much more of a challenge to wander around in the museum and look for these still lifes that more or less arranged themselves."

After some time, Pichler started to show his images to the museums staff. Many were surprised to find their working environment depicted in such a surreal and picturesque way.

"Their surprise was the final proof for me that none of the sceneries had been arranged on purpose by them, but had happened by chance," said Pichler. "In some cases, the scenery itself did not look too special when encountered in real life. But photography helped to reveal its visual qualities."

Jim Stephenson is a photographer and filmmaker of architecture and interiors. His clients include Sou Fujimoto Architects, Grimshaw and Studio Weave, and his work has been featured in publications including The Guardian, The New York Times, The Sunday Times, Blueprint and Dezeen. He is also co-curator of Miniclick, a photography organisation that curates free talks, workshops and exhibitions.