Dezeen Watch Store: the Axcent Pocket Watch by Stockholm collective People People is designed for those who are used to reaching into their pocket for their phone to tell the time (+ slideshow).

Available exclusively to pre-order from Dezeen Watch Store, the Axcent Pocket Watch is the first timepiece by the Stockholm industrial design group, manufactured and marketed via their People Products company.

People People set itself the challenge of updating the traditional pocket watch in the same way that the fashion industry has updated the three-piece suit.

"We noticed that fashion trends leaned more toward well-dressed three-piece suits, but we noticed that there were few accessories that goes in line with this," said Klara Petersén, industrial designer at People People, who led the development of the watch. 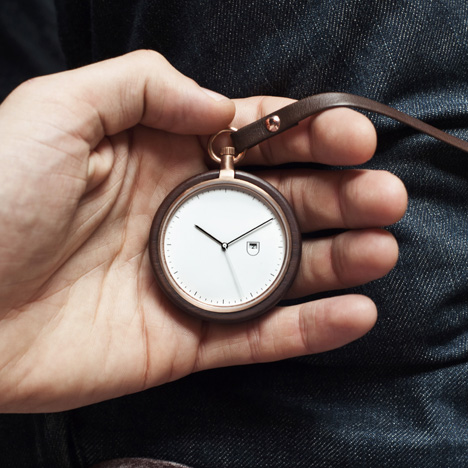 The return of the pocket watch

"We liked the idea of embracing and cherishing the concept of a classic iconic product and to bring it back to life, but in a new improved way," she added. "It's a nice contrast to the complexity of the "smart" watches currently being pushed at us."

The studio decided to make the watch as simple as possible, with a single function, and prioritise design details like the sourcing exactly the right leather for the strap and making sure the watch had the right proportions.

The minimal design is made from stainless steel in two colours – bronze and grey – to be light enough to carry in a pocket or wear on the body using either a chain or leather strap.

"People's behaviour of using a watch has gone from showing time to showing style," said People People. "The practice of telling time has transferred to a large extent to our mobile phones and also changed our behaviour where we reach for our pockets to check the hour rather than flick over our wrists."

"By keeping the original usage of the pocket watch, we could capture and encourage the behaviour that we've seen, allowing the owner to 'show off' the accessory when being pulled out of the pocket."

The Axcent Pocket Watch is the second product released under the People Products banner.

The first was the Transparent Speaker – a speaker with easily replaceable components to make it more sustainable.

Both were originally created as in-house design challenges for People People, and published on their in-house blog.

"The concept and design of the pocket watch was published on our design studio blog peoplepeople.se two years ago where we got really good feedback," explained Petersén. "Week after week people kept mailing us and passionately asking about it. The pocket watch follows our idea to only produce what there is a demand for."

"Our first product the Transparent speaker was started in much the same way by a viral hit on the internet and later was financed on Kickstarter. We think it should be forbidden to produce stuff on an industrial scale that hasn't been tested in popularity."

People People was founded in 2009 by Martin Willers, Johan Frössén, Anna Palleschitz and Per Brickstad, and has worked on products for a wide range of clients including Scandinavian airline SAS and Bookman bicycle accessories, for which it designed a handle-bar cup holder.

Pocket watches have made a comeback in recent years as designers revitalised the classic form to make it relevant for contemporary lifestyles. Examples include Mathieu Lehanneur's Take Time watch which was conceived as an affordable pocket watch "for the Instagram generation" and the T Series by MMT.