The first timepiece from French brand Klokers, featuring an unusual dial design made of three rotating disks, is now available to buy from Dezeen Watch Store.

The KLOK-01 has a unique mechanism inspired by a circular slide rule – a once-ubiquitous analog computer used for mathematics in the 1950s and 60s, although it was first invented in the 17th century.

Instead of rotating hands, three concentric disks rotate at different speeds to display time along a red vertical axis. Each disk moves by either the hour, minute or second, which means the dial is constantly in motion.

A pushback function at 8 o'clock unlocks the 44-millimetre watch head from its base, allowing the user to change straps easily. The watch head is available in yellow, black or indigo blue from Dezeen Watch Store.

The standalone watch head can also be attached to a fob to create a pocket watch or a leather pouch that sits upright on a desk.

KLOK-01 was launched via crowdsourcing platform Kickstarter in September 2015. Founders Richard Piras and Nicolas Boutherin were influenced by celestial mechanics and the laws of physics while experimenting with a new way to tell the time.

"Klokers bring movement and rhythm back to the dial," said Boutherin.

"We are looking to create a visual curiosity and change the way people habitually tell the time, destabilising them and forcing them to question themselves in order to understand how to read the time."

Despite being Swiss-made with a high-precision quartz movement, the duo insist Klokers is not a luxury watch brand.

"Our goal is to make things well and it was for this reason that we wanted a Swiss-made movement and to deliver an elegant and affordable product," they added. 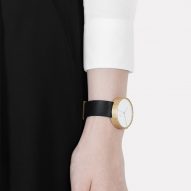 Other new releases at Dezeen Watch Store include Squarestreet's Plano with a Swedish reindeer-leather strap and the second watch from Taiwan-based brand Chi and Chi.