A kitchen concealed behind a pivoting wooden wall is one of several interventions made to transform an old agricultural warehouse in Almenar de Soria, Spain, into a community events space (+ slideshow).

Local architect Valentín Sanz's studio Liquenlav was asked to convert the building, which belonged to the Spanish National Grain Storage Network (SENPA), into a space for the municipal council and a local neighbourhood association.

The shed is one of three connected units originally used to store and manage grain production, which cover a total of 1,200 square metres and each have their own separate access.

Having been in use since 1960, the building was handed over to the local government in the late 1990s as it was no longer large enough to accommodate modern machinery.

Recognising the potential for the building to be given a new purpose, the councillors declared that it was "too small for machines but perfect for people".

It is now one of the only public buildings in the town, and is used to host exhibitions, concerts and public dances.

The warehouse is one of few historical industrial structures remaining in the region and the architects recognised the value in preserving its distinctive original features, including the brick walls and gabled roof supported by an innovative truss system.

Focusing on one of the three large units, the project team sought to revitalise its interior space and entrance without disrupting the existing building fabric and potential for future redevelopment.

"Our intervention is a new architectural piece inserted into an existing one that will activate the original space in a different way," Sanz told Dezeen. "We tried to show this using a new geometry and a new material."

The existing walls and roof framework are painted white to provide a uniform backdrop for modern lighting fixtures and wooden structures that define the building's new functions. 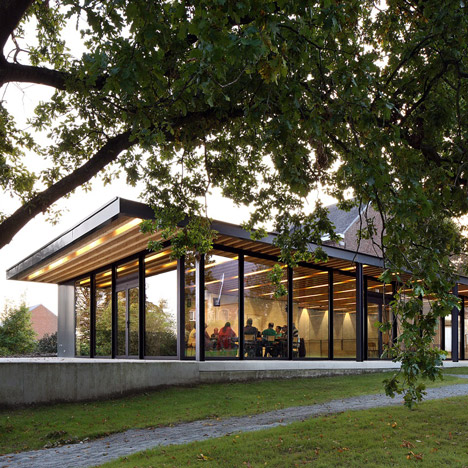 "The project is solved by a lamp, a tunnel and a wall," Sanz pointed out, "but the proposed intervention is also focused on the restoration of the space, with a new floor, new windows and a new stage."

A tunnel that extends from the entrance into the main hall enhances the experience of entering the building. It features plywood-lined surfaces and integrated lighting.

Behind a new wooden wall is a kitchen area that is revealed when a pivoting section is swung outwards. The wheeled section of the wall incorporates a high shelf and can be repositioned depending on the requirements of a particular event.

The kitchen's work tables are made from the same material and are also on wheels so they can be moved around. Two toilets are accommodated behind the wall at the other end from the kitchen.

A new garden created outside the building incorporates benches made by fixing wooden seats on top of giant tyres filled with soil. Trees or shrubs grow out of the holes at their centres.

According to Sanz, the building is set to retain its current purpose indefinitely as the town's inhabitants are currently making good use of it. There is also the potential to similarly renovate the two adjoining buildings, depending on the community's future needs.

Other projects that have given disused industrial buildings a new cultural purpose include the transformation of a stone tannery in northwest Spain into an events space, and an old maritime building in the Netherlands that now houses a theatre with a glass auditorium.