To commemorate what would have been Jacobs' 100th birthday, Google has created a customised logo in its that depicts the author among colourful buildings that vaguely spell out the search engine's name.

Displayed to users in the US on the search engine's homepage, the illustration is drawn to look like New York's Greenwich Village and includes landmarks like the Washington Square Arch.

Jacobs, who died in 2006 aged 89, lived in the Manhattan neighbourhood and famously campaigned against city planner Robert Moses' proposals for the area. 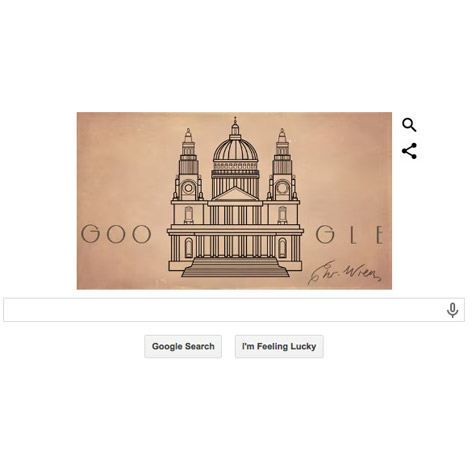 She was involved in the cancellation of the Lower Manhattan Expressway, which would have also involved the demolition of parts of SoHo and Little Italy, and was arrested in 1968 for inciting a crowd at a public hearing about the project.

Born Jane Butzner in 1916, Jacobs had no formal training in urban planning but became a prominent writer and critic in the male-dominated field.

She started out as a reporter for Amerika magazine, then worked at Architectural Forum before writing her influential 1961 book The Death and Life of Great American Cities, which argued that urban renewal did not respect the needs of most city dwellers.

Just before the book was published, Moses declared the 14-block area surrounding her Hudson Street home as a "slum" and revealed plans to tear it down. Jacobs rallied a committee to save the West Village, and hundreds attended the court hearings to protest the proposals, which were eventually dropped after eight months.

After moving to Toronto in 1968, Jacobs also helped stop the proposed Spadina Expressway and was arrested twice during demonstrations.

She published The Economy of Cities in 1969, which argues that cities are the primary drivers of economic development.

"If I were to be remembered as a really important thinker of the century, the most important thing I've contributed is my discussion of what makes economic expansion happen," she said in a 2001 interview with Reason magazine. "This is something that has puzzled people always. I think I've figured out what it is."

Google has previously celebrated architects and designers including Kenzo Tange, Antoni Gaudí, Saul Bass, and Christopher Wren with their own dedicated doodles.