Architecture studio Narch has renovated a Barcelona apartment, removing many of the internal walls to create a single space with a variety of patterned tile floors (+ slideshow).

The historic apartment is located in the Eixample district of Barcelona, and features a number of decorative floors dating back to the early 20th century.

Narch was asked to transform the 65-square-metre home to create a space large enough to host family events. To achieve this, the designers removed most the internal walls, creating a more straightforward open-plan layout.

But removing these partitions also had another effect – the tiled floors, which previously had been confined to separate rooms, now appear alongside one another in a single eclectic composition.

These tiles, known as encaustic tiles, are traditional in Barcelona. They are made by pouring differently pigmented ceramics into a mould, before pressing them to create a pattern that goes right through.

The team sourced extra floor tiles from the same period to fill in any openings.

"We used all the existing mosaics that we could – pulling up all the floor tiles, cleaning them and putting them back again – but the original kitchen and bathroom have non-original mosaics," the Barcelona studio told Dezeen.

"We went to a messy antiques shop and bought other mosaics from the beginning of the 20th century, which we put into our little bathroom and kitchen area," they continued. 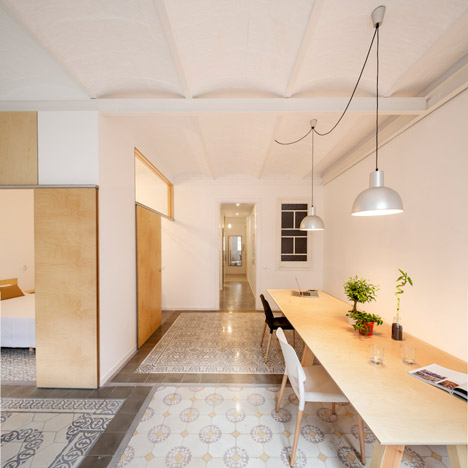 With the new layout, the apartment has two bedrooms that sit at either end of a dog-legged plan, separated by the large living space and bathroom.

The entrance leads directly into the living space, saving the valuable floor area that would otherwise have served as a lobby. The room includes a kitchen, dining space and a lounge, and features French doors that open out on to a pair of balconies.

The patterned flooring serves as a reminder of the original layout, paying tribute to the heritage of the space. To place further emphasis on this flooring, the architects have positioned appliances and storage at the edges of the rooms wherever possible.

"All the elements are reorganised into the perimeter, placing the kitchen and the storage areas along the walls to provide spatial and visual continuity," said Narch.

Glass doors are used to screen off the bedrooms, but these can slide back to create one large space. They are made from semi-opaque glass, which allows light to filter through whilst still creating privacy.

"We decided to use white laminated glass for the sliding doors because we wanted a neutral material in order to emphasise the colour of the mosaic patterns," said the team.

"Another reason is that the apartment is very deep, 14 meters long, so by using glass sliding doors, the light can pass though them," they explained. "It generates a sense of lightness and also reflects the environment."

The client didn't want to have exposed beams across the ceiling, so the architects created a dropped ceiling with lighting hidden in the recesses around the edges.

"We wanted the apartment to become a peaceful and comfortable space, filled with spring-like lighting and fresh breeze sweeping through the rooms," they added.

Decorative floor tiles are common in Barcelona, particularly in the Eixample district. Other recent renovations include a home by local studio Built Architecture where modern oak cabinetry is paired with the tiles, and a home by Nook Architects where wooden panels and doors slide across the geometric floors.