Milan 2016: Slovenian designer Dan Adlešič has updated his collection of toy-like electronics with a surface that trails light from a laser pen and a keyboard-activated lamp (+ movie).

Adlešič, who graduated from Design Academy Eindhoven in 2015, designed the Radiation and Light Keyboard lamps for his collection of purposefully ridiculous electronic products that only work in response to unconventional movements.

"Work, play and experimenting is what I like to do," Adlešič told Dezeen. "I have a huge library of materials and things that I have found. I play with them until I discover something interesting." 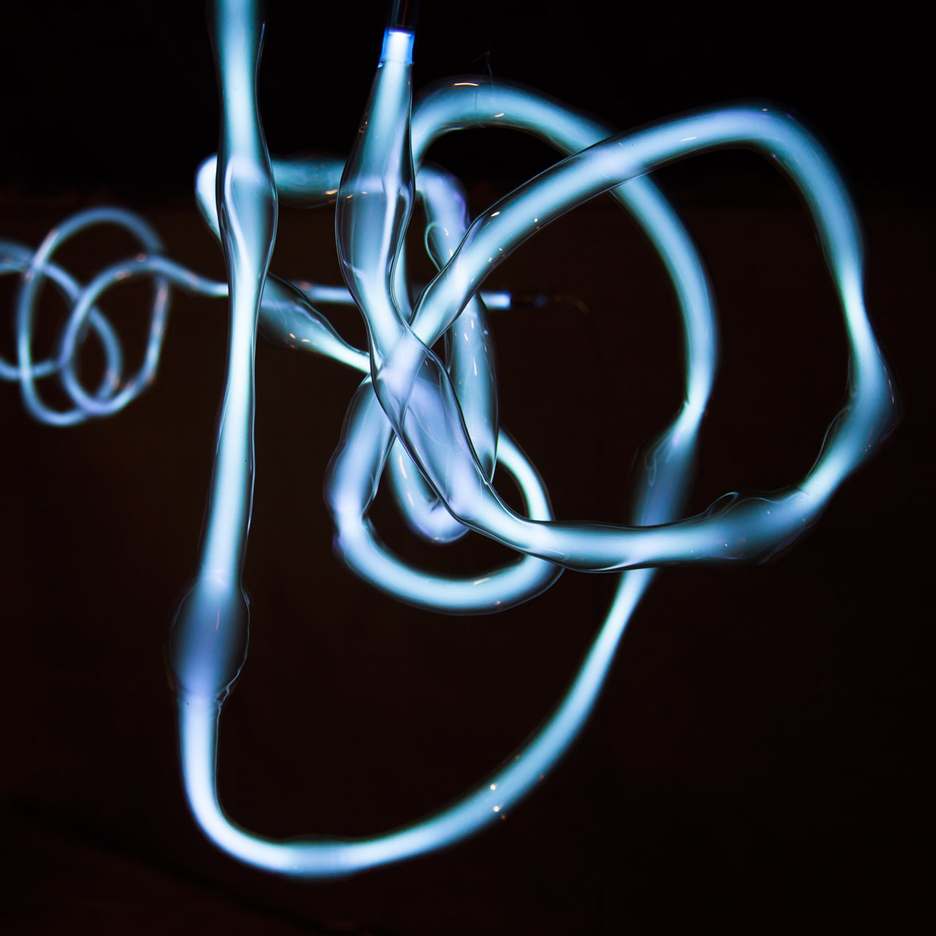 "Because of Radiation's dense glowing ability, it puts light into a slow motion state which allows us to draw with light," he added.

Light Keyboard is based on old computer screens where each pixel is visible. It is made from 144 buttons each connected to 144 LED lights inside a resin box.

Each button corresponds to a different 'pixel' that can be turned on or off.

Video demonstrating how the Radiation lamp interacts with a laser pen

"I took a very simple principle of a switch and light bulb and multiplied it many times until the lights became pixels of a very basic manual screen," said the designer.

"Depending on how you look at the screens, they are either lights or images."

Adlešič's objects often take inspiration from children's toys – described by the designer as "totems of fiction" – and are intended to be a playful alternative to standardised electronics.

His experience in improvisational theatre prompted him to design pieces that are "indefinite", and where transformation is an important part of the final product.

"I used to play in an improvisational theatre where every second on the stage was an opportunity to make the moment interesting for the public," he said.

"A simple action such as walking or sitting on the chair was never simple. This way of thinking always followed me and my friends also when we were off the stage. Our whole life became a play. I think these imaginative moments give richness to our lives."

Adlešič's electronics collection, called Electricty is Just Like Woah, was on show at Spazio Rossana Orlandi during this year's Milan design week, which took place from 12 to 17 April 2016.

Other products displayed in the space included an eyewear collection created from test samples of new biodegradable plastics and a range of moulded ceramic lamps by Dutch designer Piet Hein Eek.