The collection, which ranges from large limited-edition furniture pieces to smaller items such as vases, was on show at the Spazio Rossana Orlandi gallery during Milan design week.

Eek has expanded the range of moulded ceramic lamps he introduced last year to include a variety of colours and a desk edition.

Each cuboid-shaped mould has a recess containing the bulb and a simple metal switch. The Single Template Lamp can either be stood on its end or mounted on the wall as a down- or up-lighter.

"It's one mould that can be used for almost every purpose; on the wall, next to the bed, on the shelves, or a desk lamp," Eek told Dezeen.

For the desk lamp, the ceramic mould is mounted onto a brass rod that is then fixed to a matching ceramic base.

The low-tech lamp and its cardboard packaging are made entirely in-house, as are all the pieces launched in Milan, Eek told Dezeen.

"It is because you get a headache from producing with others that we do everything ourselves," Eek told Dezeen. "If it is from our brand, it is made in Eindhoven, with our own machines and our own people."

Eek also designed a limited-edition outdoor coffee table especially for gallerist Rossana Orlandi. The table is a take on his Waste Waste 40x40 collection, which was created by meticulously gluing together 40 by 40 millimetre squares of scrap wood.

Instead of using wood, Eek used 40 by 40 millimetre ceramic tiles in pale pastel colours, which he mounted onto an aluminium frame.

"The tiles demand a ridiculous amount of work, much more than the 40x40 scrap-wood blocks," Eek told Dezeen.

"We made the interior from aluminium with the punching machines and then we put porcelain on the outside, which gives a very light and strong structure to put the tiles on," he added. "It's of course extremely weatherproof compared to most other materials." 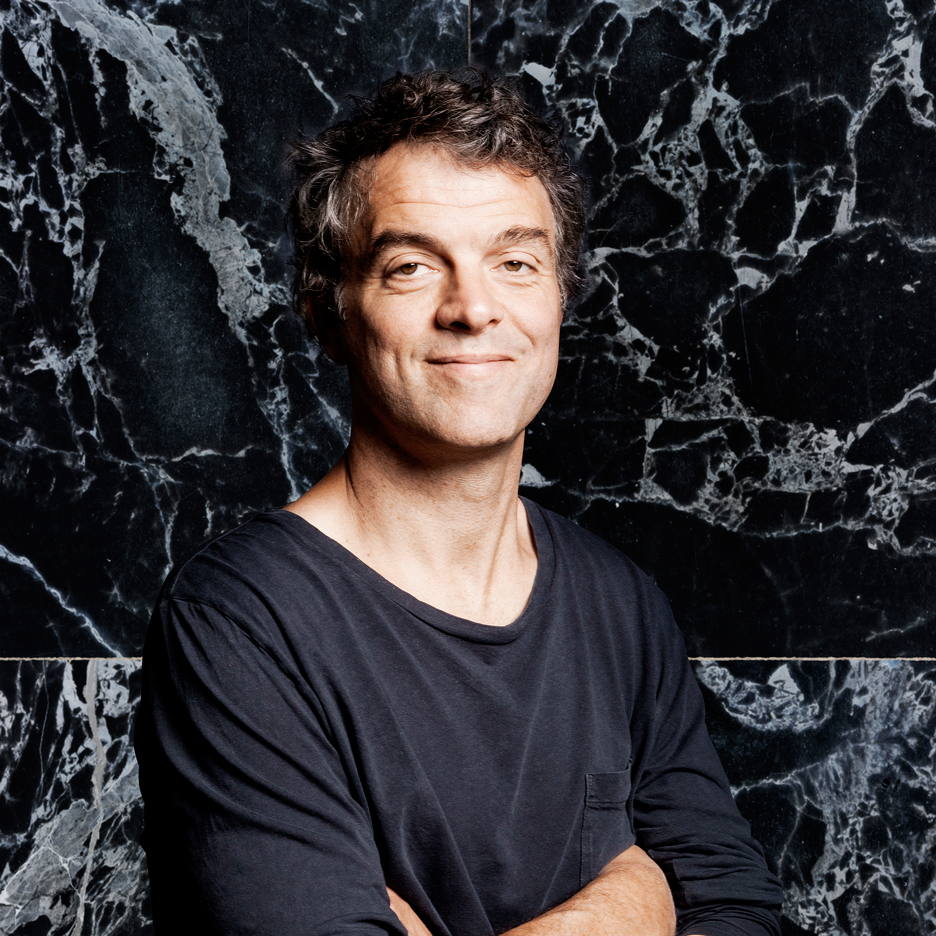 Eek also presented a limited-edition cabinet, a desk and two stools all made from scrap-wood tiles, as well as a cupboard that resembles a pile of stacked beams resting on a brass plinth.

"The beams were quite similar to the ones the customer had in his farm looking over from the sofa to the field so that's how we decided to make a very low pile of beams," Eek told Dezeen. "The handles of the drawers and cabinets are hidden to make the design as convincing as possible."

Eek also used recycled materials to create a range of lights that resemble traditional oil lamps. Each one consists of an old lamp shade that sits on a made-to-measure metal base.

"It's a sort of mix of old vintage, classic traditional construction, and modern machines," said the designer.

Eek presented a small wall lamp with a folded metal shade and a strip LED lamp, originally created for an old French mill he converted into a pair of holiday homes.

A vase made from waste brass, copper and steel, and a gold velour version of Eek's army beanbag from 2015 were also on show.

Other products displayed at Spazio Rossana Orlandi during this year's Milan design week, which took place from 12 to 17 April 2016, included an eyewear collection created from test samples of new biodegradable plastics.