Milan 2016: German designer Thomas Schnur has designed a gridded storage system than can be used to display plants, hang up clothes, or as a framework for shelves (+ slideshow).

Schnur based his Grid project on retail storage solutions and a set of tiles from Piero Lissoni's Patchwork collection for Italian brand Cotto, which features a series of criss-crossing lines.

Hoping to "translate these two-dimensional lines into a three-dimensional object", the designer – whose previous projects include a set of squishy lamps and a wooden bench with logs instead of legs – used a wire grid supported by a frame of metal tubes. 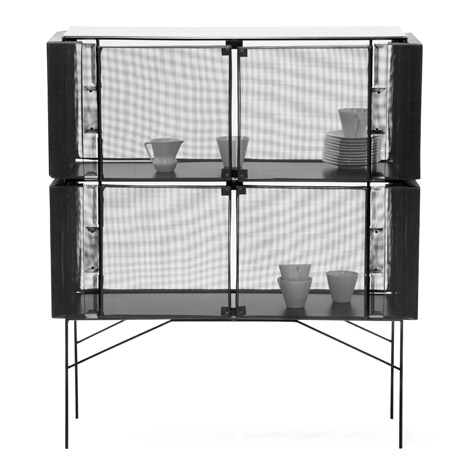 "Grid is mainly inspired by a wire grid, which we know from displays for shops and stores," Schnur told Dezeen. "I transferred this wire grid into an object for home use because I thought it could be also practical at home."

"To use a metal tube for the frame of the wire grid was very logical step for me as I wanted the object to not be expensive to produce," he continued. "The use of metal also allows a demountable structure for sending it flat-packed."

Schnur was among seven designers and architects presenting projects related to Lissoni's Patchwork collection as part of the Another Perspective 4 exhibition, which took place in the Ventura Lambrate district during Milan design week.

Other designs that were on show during Milan design week included a collection of "intentionally boring" office furniture, a series of 50 chairs based on manga-style comic books and a range of splotchy metal stools.