Architectural photographer Iwan Baan has taken new images of the Steven Holl-designed Bloch Building at the Nelson-Atkins art museum, which show the structure as it enters its 10th year (+ slideshow).

The Bloch Building opened in June 2007 on the campus of the Nelson-Atkins Museum of Art in Kansas City, Missouri.

Iwan Baan, one of the world's most acclaimed architectural photographers, was commissioned to capture new images of the building, which will celebrate its 10th anniversary next year.

"It is inspiring to see in Iwan's new photos how well the Bloch Building is used, bringing the museum experience for the public into the landscape, shaping space and light for engaging the art," said Chris McVoy, a senior partner at Steven Holl Architects.

"The earth rises up between blocks of light, carving meaning in spaces for art," added Holl.

Situated on the eastern edge of the campus and overlooking a sculpture Park, the 165,000-square-foot (15,330-square-metre) building is composed of five connected glass pavilions that glow softly at night.

The volumes step down a gentle slope and are partly embedded in the landscape.

The building was conceived as a "delicate counterpoint" to the museum's main building, a Neoclassical stone structure dating to 1933. It expanded the museum's exhibition space by more than 70 per cent.

"From the movement through the landscape, the five glass 'lenses' form new spaces and angles of vision, while bringing different qualities of light to the galleries below," said Holl's New York-based firm. 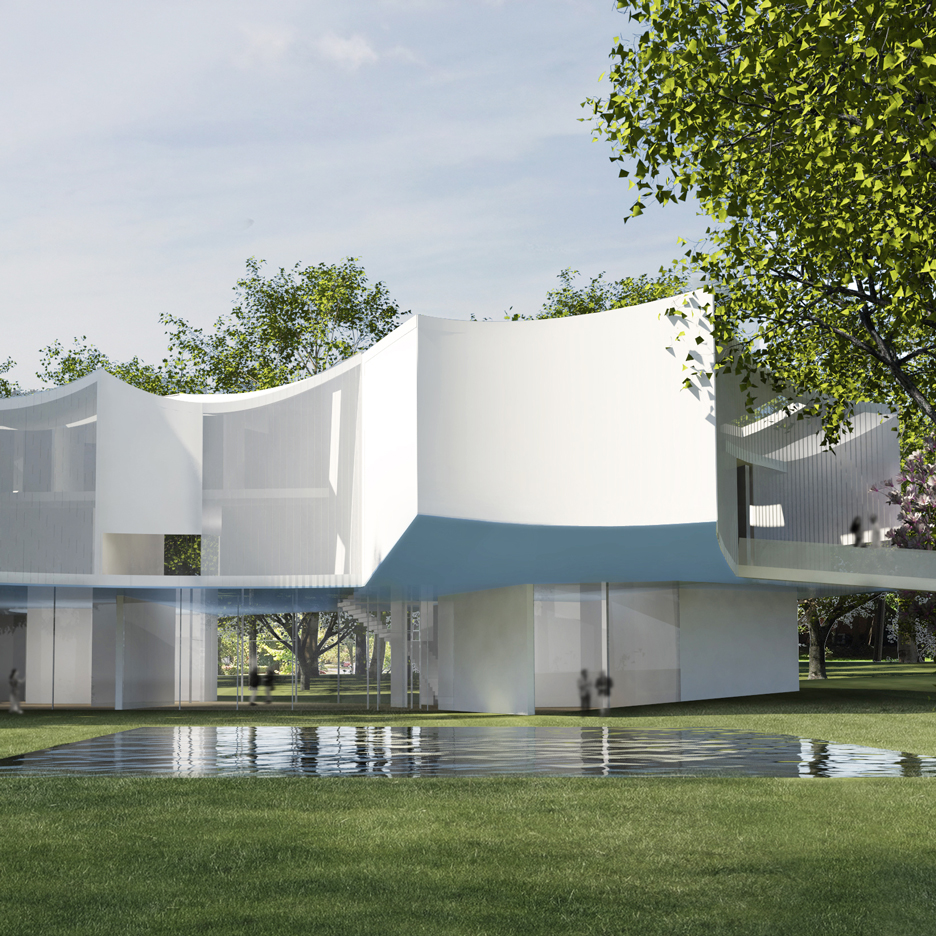 The building's main concourse is filled with natural light that streams in from clerestory windows.

In addition to galleries, the building contains a lobby, store, cafe and library.

At the time of its opening, the building was hailed by former New York Times architecture critic Nicolai Ouroussoff as a "work of haunting power" that demonstrates how art and architecture "can happily coexist".

"It's an approach that should be studied by anyone who sets out to design a museum from this point forward," Ouroussoff wrote.

The building was the centrepiece of a major improvement project that included renovations to the museum's original building and a restoration of the sculpture park.

Holl won the commission in 1999 through an international competition.

"The proposed design for the museum was an imaginative and unexpected solution to the institution's needs, balancing innovation with respect for the beloved Nelson-Atkins Building," the museum said in 2007.

The museum will celebrate the 10th anniversary of the Bloch Building with a series of public events. The building is named after Henry W Bloch, co-founder of the financial services company H&R Block.

Other projects by Steven Holl – winner of a 2014 Praemium Imperiale arts prize — include the Linked Hybrid towers in Beijing and an extension to the Glasgow School of Art in Scotland. He recently unveiled plans for a visual arts centre at the Franklin & Marshall College in Pennsylvania.