This lakeside observation pavilion by Finnish studio OOPEAA doubles as a giant periscope, so visitors don't have to climb to the top to enjoy the view (+ slideshow).

Located beside a lake near Seinäjoki, western Finland, the Periscope Tower invites guests to climb up a set of stairs to reach a balcony deck boasting views across the water.

But there are also a pair of angled mirrors positioned at either end of the structure's hollow centre, meaning those unwilling or unable to climb can experience the same perspective.

"At first, the idea of a periscope was just a fun idea that we played with at the office," explained OOPEAA founder Anssi Lassila.

"It came about as we were thinking about alternative and fun approaches to making the tower accessible to all in a way that allows everyone to enjoy the views of the scenery, regardless of any possible limitations to mobility," he told Dezeen.

The tower has a structural core of cross-laminated timber (CLT) – an engineered wood that offers a more sustainable alternative to steel. 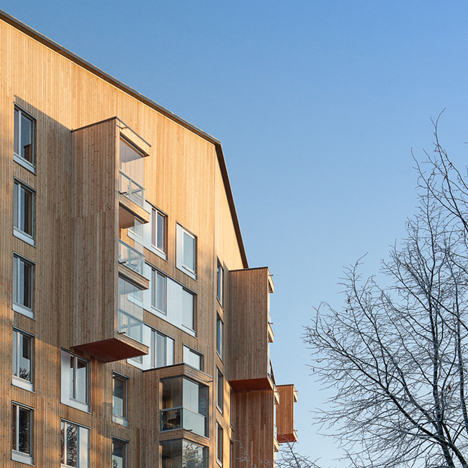 This material has previously featured in several of the studio's projects, including the Finlandia Prize-winning Puukuokka, the tallest wooden apartment block in Finland.

The staircase spirals up around the outside of this CLT core, behind a facade of larch battens.

These battens are attached to a wooden frame, generously spaced apart to offer occupants a view out as they climb, and to allow daylight to enter.

"The use of cross-laminated timber made it possible to create a more stable and sturdy structure, as well as allowed for the prefabrication of the whole building in three parts prepared offsite and simply assembled together onsite," said Lassila.

"This made it possible to create a safer and faster building process."

Lake Kyrösjärvi will be the setting for a major new residential development, housing approximately 2,000 people. OOPEAA designed the Periscope Tower as part of a larger project to improve facilities on the lakeshore.

It was built with help from students of SEDU, a local vocational school that teaches construction skills.

"The aim is to activate the dam around the manmade lake and to turn it into a recreational area serving the residents of the new neighbourhood to be constructed there, as well as others living in Seinäjoki and the region at large," added the architect.

"It will be connected to a broader network of recreational paths designed to be accessible to everyone."

OOPEAA has an office in Seinäjoki, as well as in Helsinki. The city is also home to a series of buildings by Alvar Aalto, as well as a new cavernous copper-clad library.