Canadian architect Jean Verville has designed a cabin in rural Quebec with dark metal cladding and pointy roofs that "seems to emerge from a children's story" (+ slideshow).

The holiday dwelling is situated on a gently sloping site in a hemlock forest in Eastern Townships, a region in southeastern Quebec.

Its name, Fahouse, is derived from the idea of "the new family house" according to Jean Verville, who founded his eponymous Montreal studio in 2004.

Verville worked closely with the client – a young professional couple with two children – to design a home that could have been taken from a fairytale.

"Derived from the archetypal figure of the house, the double triangular prism perfectly illustrates childhood and characterises the whole development of this project," said Verville, who can be seen draped over the interior fitting in some of the photographs.

"I wanted to illustrate childhood, which characterises the whole development of this project," he added about his posing.

The front volume appears as an A-frame structure perched atop a glass box. A portion of the ground level is cut away, resulting in a cantilever that covers a large terrace. 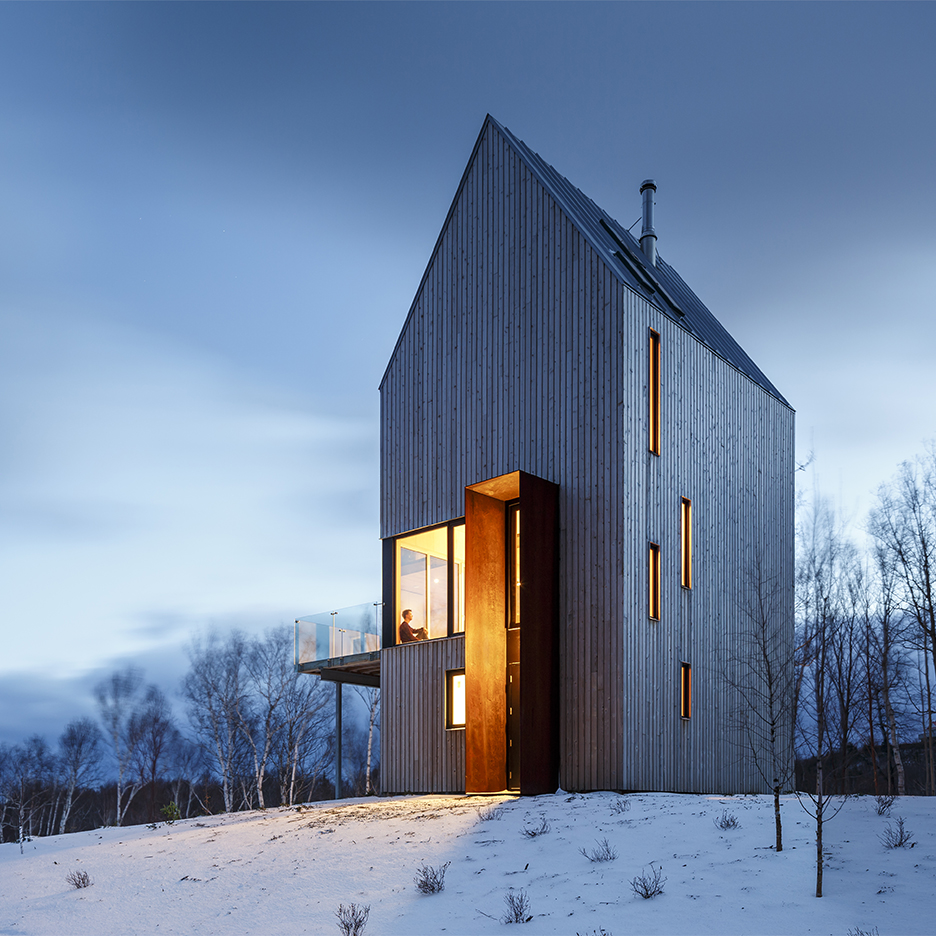 The rear volume reads as a tall, slender box with a gabled roof.

On one side of the cabin, the roof slopes down to nearly touch the ground and is punctuated with two small, square windows.

Visitors enter into a living room and kitchen lined with glass walls, which open out onto the sheltered patio.

Throughout the home, the architect used baltic plywood for panels and cabinetry, except for a mudroom that is painted raspberry pink.

Spaces are lightly furnished to keep the focus on the nature outdoors.

On this level, the dwelling is meant to read as "two houses" – one for adults and one for kids.

The parents' area was conceived as "a beehive composed of a succession of cells, each offering a distinctive ritual". This portion of the home contains a sleeping room, shower room, lavatory and closet.

Large windows framed in black look out over the wooded landscape.

"Instead of offering big loft-style spaces, I separated functions into small rooms," Verville told Dezeen. "It offers a sense of discovery of dissimulated spaces, and a view of the mysterious forest."

The children's room features a built-in bunk bed and a small interior window that overlooks the stairs.

The attic level contains a playroom and space for guests. White-painted wooden beams rise to a sharp point in the A-framed room.

"The upper floor evokes the lair of the whale to brighten the imagination and allow for a colourful world of adventures," the studio said.

Verville's studio has designed a range of architectural projects and installations, including a home outside of Montreal that consists of interlocking, geometric volumes clad in white timber.

Quebec dwellings by other studios include a woodland cottage by Cargo Architecture with a swing seat built into its facade and a gabled family home by Bourgeois Lechasseur Architects that is sheathed in cedar tiles.