The pipe features a short stem pointing downwards, a long stem from which the smoke is inhaled, and a shallow chamber to hold the user's substance of choice.

Its name refers to the way its asymmetrical silhouette balances on a table, and Wolfond claims it is "the first glass pipe to which design considerations have been meticulously applied." 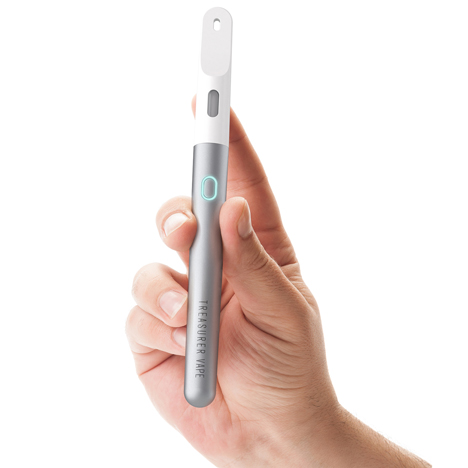 Mormedi's e-cigarette is designed as a personal accessory

The Balance Pipe is available in blue and clear versions, and will be sold for $65 (£49) from Opening Ceremony's flagship stores in New York and Los Angeles, as well as Tetra's website.

Cannabis is one of the fastest growing industries in the US, and the retail and wholesale marijuana market could reach nearly $11 billion (£7.6 billion) in annual revenue by 2019, according to Arc View – a California-based research firm.

In total, 23 American states have legalised marijuana use in some form. The majority only allow it for medicinal purposes, although recreational use is permitted in Alaska, Colorado, Oregon, Washington DC and Washington state.

Others designers to have created smoking accessories include Seattle-based startup Printabowl, which 3D-printed a range of water pipes for smoking pot, and product design consultancy Mormedi, whose electronic cigarette is similar to a pen.