Rio 2016: after it hosts the women's basketball tournament at this summer's Olympics in Rio de Janeiro, this venue will be overhauled halfway through the games to accommodate fencing (+ slideshow).

The Arena da Juventude – or Youth Arena – was designed by Vigliecca & Associados, the local firm also responsible for the overall masterplan of the Deodoro Olympic Park where the venue is situated.

A vast flat roof covering the arena is supported by thin external columns, allowing the interior to be free of structural supports.

The creation of a flexible internal space was key to the project, as the venue is hosting two different sports for Rio 2016.

"Youth Arena is the only arena of Rio 2016 that will change your settings during the Olympic Games to fit completely different sports," said Vigliecca & Associados.

During the first week of the games, which began 5 August 2016, the arena will host the women's basketball tournament.

Before week two, it will be transformed into a space for the fencing section of the modern pentathlon.

"Basketball and fencing are diametrically opposed sports, with demands for different gaming space and a specific number of viewers," said Vigliecca & Associados. 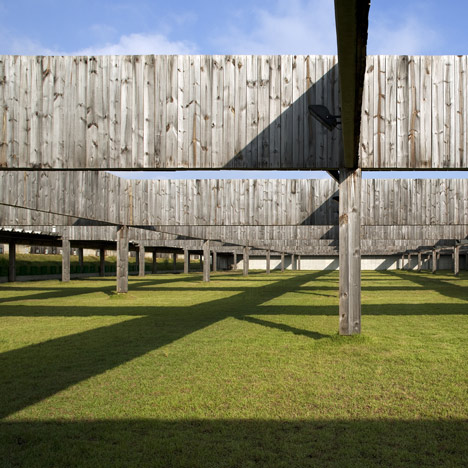 As a basketball arena it features stadium seating on two sides, then capacity will be decreased to make room for 10 pairs of athletes to fence simultaneously on a series of platforms.

On the outside, corrugated orange panels fill a gridded framework across two opposite facades.

The other two external walls comprise a permeable membrane that helps let air into the structure. Of this pair, one is tucked back from the roofline while the other end sits flush to the edge.

After the games, the arena will change again to become a training centre with eight sports courts under its roof.

This forms part of Rio's Olympics legacy, which also involves turning the Arenas Cariocas into practice facilities and dismantling the Handball Arena for rebuilding as four schools.

Elsewhere in the city, the Olympic golf course features a tree-like canopy that collects rainwater and shooting events are taking place at a timber and concrete complex.

Photography is by Gabriel Heusi.