Online retailer Needs & Wants Studios has collaborated with a Toronto architecture student to transform a shipping container into a mobile boutique that serves as the brand's first physical store (+ slideshow).

Measuring eight by 20 feet (2.4 by six metres), the showroom and retail space made its debut in a forested area in The Kingsway, an affluent neighbourhood in Toronto.

"We doodled our plans for the container together last fall," said Brown, who started the Toronto-based brand in 2013.

Painted white, the rectangular enclosure has entrances on its two short sides.

On the long walls, the team cut out two large squares and inserted mirrored, one-way glazing. The windows not only enable daylight to enter the store, but also "expand the physicality of the space".

The windows also reflect the surrounding landscape, enabling the store to adapt to its context.

"On the outside of the container, the intent is to accentuate the locations of the space," the company said.

The interior features walls sheathed in strips of light-coloured wood and a herringbone floor made of white oak. 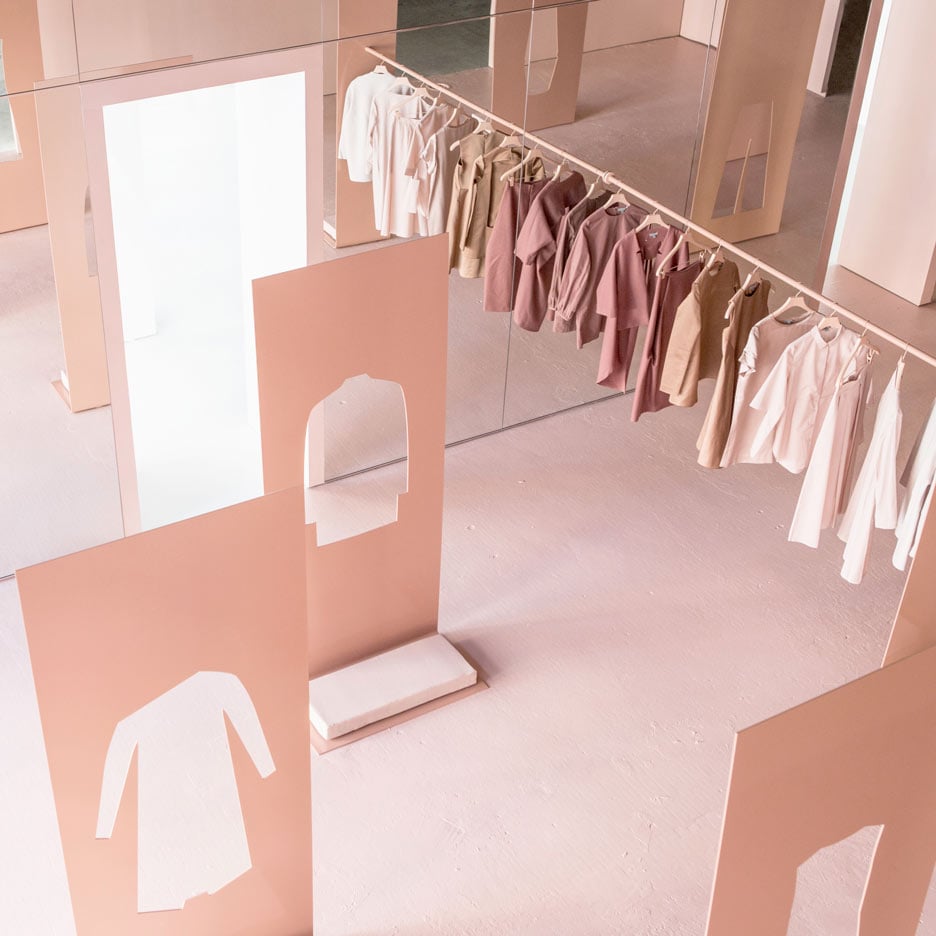 The space is fitted with a minimal amount of decor, with clothing displayed on simple metal racks. A large mirror is propped up against one wall.

The container was sourced from Storstac, a Canadian supplier of new, used and modified shipping containers.

Contractors were used to execute the design for the Needs & Wants store, including Glasshaus, a Canadian manufacturer of windows and doors. Glasshaus also has a line of tiny houses made from shipping containers.

Examples range from offices, houses and giant periscopes, to proposals for entire skyscrapers.

During its stay in Toronto, the boutique drew 30 to 50 visitors per day, from shoppers to curious onlookers.

"We met all sorts of people," said Brown. "It's interesting because these people are just out and about running and bike riding. There even was a kayaking class not too far from us."

When not in operation as a store, the container is used by the company as a workspace.

It is scheduled to travel to locations in two Ontario cities, Prince Edward County and Mississauga, along with New York.

"We're hoping for Miami before the year' end as well," said Brown. "Once we open our doors to visitors, we send coordinates via our newsletter that brings you to a live map that directs you to the space."

The brand has become well known for its upscale mens outerwear, such as satin baseball jackets and metallic racers. It has expanded its collection to include shirts, hoodies and home fragrances.

The company recently helped design new branding for Glasshaus. At a pop-up event on 5 August 2016, Glasshaus displayed one of its container shelters alongside the Needs & Wants mobile shop in Toronto.

Other mobile architecture includes a lingerie store intended to travel across the US and a trailer that was converted into a portable dental clinic.

Photography is by James C Lee.