Dezeen promotion: Satellite Architects has designed a gridded structure filled with mirrors and vegetation for the entrance to designjunction's event during this year's London Design Festival.

The London-based firm was asked to create an installation to cover the facade of designjunction's Cubitt House pavilion – a two-storey temporary structure in London's King's Cross that will house more than 100 international furniture and lighting brands during the festival.

Satellite Architects, whose previous projects include a new cookery school for River Cottage headquarters, wanted to allow trees and bushes to grow through the facade.

The team designed the modular structure using Danish designer Peter J Lassen's Grid system, which features a series of cubic-shaped frames that can be built up in a variety of ways.

The 4,000 modules will transition from black at the base to white at the top, creating a pixelated effect. Acrylic panels within the structure, supplied by material company PyraSied, will be orientated to reflect or provide glimpses of the foliage behind.

"The facade is intended to reflect the temporary nature of designjunction as an exhibition, and the developing surroundings, combining the natural and artificial elements," said Stewart Dodd, founding director of Satellite Architects.

"The arrangement of the pixels directs visitors to the entrances where reflective elements multiply the structural presence of the facade," he continued. 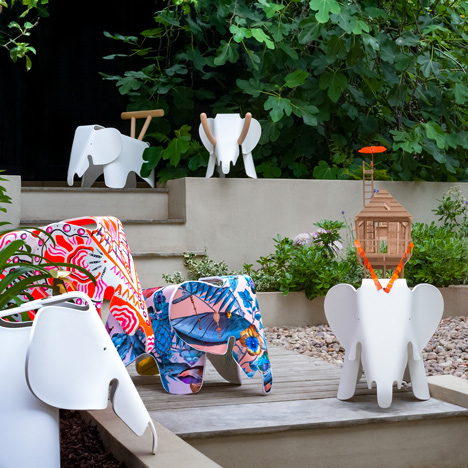 The structure will be built in collaboration with Danish design curators Icons of Denmark and structural engineers Elliott Wood. At 70-metres-long and seven-metres-high, it will be the world's largest installation of Grid, according to the team.

London design and build firm Oktra has created a scaffold framework to mount the modules onto. This will be built in three days and constructed flat before it is lifted into position and tied to the Cubitt House pavilion.

Visitors will enter the exhibition through an opening in the gridded facade. Behind this, there will be a garden space with a popup cafe at the back, as well as outdoor lighting and plants supplied by Artemide and Bloomon.

The cafe will be furnished with Deadgood's Naked collection by Magnus Long and Gala Wright, which includes a perforated steel seat and backrest and a matching bistro table.

Designjunction will take place from 22 to 25 September 2016 during London Design Festival. Dezeen are media partners for the event, which will deliver a programme of exhibitions, installations, retail experience, events and workshops based upon the theme Immersed in Design.

Dezeen readers can receive a 50 per cent discount for tickets by visiting the designjunction website and registering use the code DEZEEN.

During the exhibition, ten dyslexic designers from the worlds of illustration, homeware and fashion are showing work at this year's designjunction exhibition in London.

All images are courtesy of Satellite Architects unless stated otherwise.