The 24 print designs were commissioned by Make Bank, a social enterprise instigated by Kirsty Thomas, a designer and co-founder of Tom Pigeon, the creative studio set up with her husband Pete in 2014.

Each artwork in the Print Project collection, which was launched at Designjunction during London Design Festival, reflects the creator's own characteristic style and relate to the broad theme of making and creating.

Designer Stuart Gardiner applied his infographic approach to colour theory, creating a matching set of rainbow artworks made up of all the words that can be associated with its different shades.

Other typographic interpretations of the theme came from Donna Wilson, who took her signature whimsical aesthetic to a slogan created with watercolours, and from Liverpool design studio Dorothy which hid a message within a Letraset sheet – the transferable instant lettering sheets. 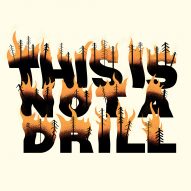 "'Make things happen' is a phrase we use in the studio," Make Bank's co-director Ali Johnson told Dezeen.

"If we're focusing on making things and being creative, then things tend to happen and that feels like a good message to share with Make Bank."

The project aims to raise money to fund arts education and materials for those that aren't able to afford it, something that the contributors to the collection hope to highlight.

"Our younger selves were fortunate enough to be able to study design and art with relative ease. We are acutely aware of the barriers facing young people today who choose to follow a similar creative path," said Dorothy's James Quail.

"Giving a little of our own time and creativity is a small gesture we hope provides some support to enable young people, whatever their background, to achieve their creative potential and ambitions.”

Elsewhere, the focus is on the tools of creativity. Illustrator Peter Judson drew up a vibrant, Memphis-style creative workspace, while Tom Pigeon, created a graphic visualisation of the essential material kits that are given out to kids, teachers and schools as part of the project.

"We worked really closely with a group of UK art and design teachers to develop the five student material kits," said Kirsty Thomas, who used to be an art teacher.

"It got me thinking about what's in a creative toolbox and was inspired to develop a print that celebrates the tools of our trade."

Proceeds from the sales of The Print Project will go towards providing material kits for school children, including asylum seekers, young carers and those living in poverty, in a bid to allow equal access to an industry that can often be reserved for the privileged.

Designjunction marks the official launch of the Make Bank initiative, but the team plan to add further designs to their online store to create an ever-growing collection of prints, or "future collectibles".

"The creative industries are thriving in the UK and there is expected to be almost 1 million new jobs in the creative economy by 2030," Thomas explained.

"We will need talented new people to fill those roles, but the current system is not diverse, equal or fair."

To combat this, Make Bank hopes to expand into mentoring events and workshops around the country as well as creating an online resource to help students explore creative career options.

Designjunction is part of the London Design Festival, during which more than 400 exhibitions and installations popped up across the capital.

Highlights included an undulating public bench by Paul Cocksedge and an installation reimagining the chair in a 17th-century Hampstead residence.