A promotional movie has been released to entice potential buyers for a massive ranch in New Mexico that features buildings by Japanese architect Tadao Ando (+ movie).

It also has a fictional town called Silverado that is used for filming Western movies.

Owned by fashion designer and film director Tom Ford, the property was recently put on the market, with a reported asking price of $75 million (£57 million).

A two-minute video set to dramatic music shows imagery of the ranch, including the primary glass and concrete house and an equestrian facility designed by Ando – the 1995 Pritzker Prize laureate. 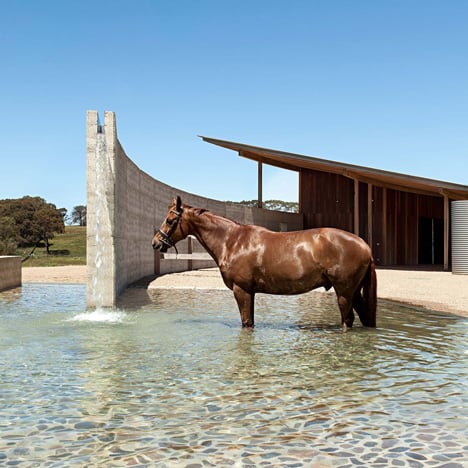 The low-slung structures encircle a reflecting pond and blend with the desert landscape.

"The stunning main residence floats on a reflecting pool and is adjoined by a state-of-the-art horse barn with eight stalls," according to the realtor's website about the property.

"The circular spaces of the indoor and outdoor riding arenas perfectly compliment this architectural masterpiece."

LA-based studio Marmol Radziner created additional structures for the property, including staff quarters, guest houses and an office building. The ranch also has a private air strip and hangar.

Other projects by Ando — known for his concrete and glass architecture — include a seaside house and art centre in Mexico and a seven-storey luxury apartment tower that is now under construction in Manhattan.

Photography and video is by Kevin Bobolsky Group.