A cluster of eight interconnected concrete volumes make up this Martha's Vineyard residence, which is designed to be moved in the event of site erosion (+ slideshow).

The single-family East House was created by Canadian architect Peter Rose in the town of Chilmark.

Serious concerns about the site's ability to support the 4,000 square foot (372 square metres) residence led the architects to devise a system that allegedly allows the house to be moved if necessary.

The home's living spaces were designed as eight individual cast-in-place concrete boxes. They are connected via interstitial corridors, which were built using lightweight timber construction.

According to the architects, this makes them structurally independent from one another, which in turn allows them to be moved more easily.

"The solution was to cast the floors in concrete, making each box a single structural unit that can be individually lifted and moved to a location far from the bluff in case of erosion," said the architects.

"The boxes are individually liftable with all interior finishes in place, and the interstitial corridors are built as light wood-framed zones," they added. "They are easily removed and rebuilt if the building is moved."

Visitors enter through the centre of the house. The western portion of the residence encompasses five bedrooms, each with an en-suite bathroom.

It is situated slightly above the rest of the house, following the site's natural slope. 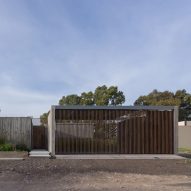 To the east, the architects included the home's public spaces. On the northern side is a study and the family's living room, while the south-eastern section encompasses an open-plan kitchen and dining room.

Many of the boxes feature large openings that the architects filled with floor-to-ceiling operable windows, creating access between various indoor and outdoor spaces.

"The gap between concrete units amplifies the sound of the ocean, bringing it and sea breezes through the entire house," said the architects.

Each of the volumes is topped with a planted roof, a feature intended to capture rainwater and prevent further site degradation.

Inside, a crisp palette of wooden interior furnishings and finishes contrasts the rough concrete shells. Floor surfaces in the house's public areas are made of stone, whereas wood was chosen for the bedrooms.

Martha's Vineyard is a popular vacation destination for the wealthy. Other properties on the exclusive island include a compact cabin in the trees designed for a graphic novelist.

Photography is by Chuck Choi unless otherwise indicated.