Graduate shows 2016: Bartlett student Matt Lucraft has proposed an evolving self-built housing co-operative based on a mishmash of English vernacular and historic Japanese architecture as a solution to London's housing crisis (+ movie).

Lucraft's Dagenham Breach Housing Co-operative seeks to address the lack of affordable housing in London by offering an open-source modular system that could be used to build customisable houses cheaply and quickly.

Taking the form of treehouse-like structures arranged around shared gardens, the buildings could be gradually extended as required by tacking on additional modules.

The master's student suggested that the first buildings could occupy brownfield sites in the London Borough of Barking and Dagenham – one of the few relatively affordable places left to build in the British capital.

"The Dagenham Breach Housing Co-operative is a community-driven, future-conscious housing system conceived out of an oddball romance between the English vernacular and historic Japanese architecture," said Lucraft. 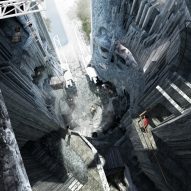 "The proposal looks to reinterpret the long-standing, basic principles of the typical London terrace, by adapting commonplace materials and structural systems to better support a flexible, yet spatially complex building typology, whilst giving voice to the local population."

The Japanese influence is evident in the system's use the "ken" unit of length, which is a traditional measurement often used to determine the distance between a building's pillars and roughly equivalent to 181.8 centimetres.

The floor plans of many Japanese buildings are laid out in squares measuring one "ken" across.

Lucraft developed this idea after a field trip to Japan, where he stayed in a compact house that provided all the necessary amenities while managing "to proportionally feel generous, yet cosy."

"The 'ken' module is an interesting size which, for the sake of my project, I used to replace the typical dimensions you would use in most panel-based construction," Lucraft told Dezeen.

"This move was a little tongue-in-cheek," he added. "Given the desire for developers to create cheaper and smaller dwellings, I chose to reduce the typical proportions, but to provide the flexibility you would typically find in most Japanese residential architecture."

The modular system, presented at the Bartlett School of Architecture's summer show in London,  could be used to construct unique buildings on available land across the city.

Details such as pitched roofs were introduced to maintain a sense of continuity with English vernacular architecture.

"This mad-cap mock-tudor-cum-metabolist architecture is a kind of baggy or open system that has no fixed point of completion," the designer explained. "It is both a subversive act of defiance against volume house builders, and an optimistic gesture of relentless invention that, if you were willing to take a leap of faith, might just actually work."

Lucraft also proposed that customised software could be developed to allow prospective home owners to create their own digital designs, which could then be prefabricated and delivered to site ready for assembly.

"The idea of creating a prefabricated, kit-of-parts housing system has come to light countless times throughout history, with the likes of [20th century architects] Walter Segal, Walter Gropius and the Japanese Metabolists being just a few of the most notable innovators," he said.

"However, the sheer scale of housing scarcity in the capital today, coupled with advancements in material engineering, give new impetus for this project to be seriously considered in a London context."

Lucraft completed the project as part of his first year studies on the Bartlett's Unit 24 Master's course, led by Michael Tite, Penelope Haralambidou and Simon Kennedy.

Other projects presented at the school's summer show included Adrian Yiu's plan to create an independent enterprise zone in a disused Rio de Janeiro quarry, and Louise Bjørnskov Schmidt's design for an ecological education facility that circles a lake in a Panama rainforest.