For his final-year project on the Bartlett School of Architecture's masters programme, Yiu designed a facility that would be built into the sides of an excavated canyon.

He sees the project as a response to the social oppression of residents living in the Morro da Providencia favela, which is situated on a hillside between a port and the city's main train station.

He suggests operating the quarry as a community-led cooperative, with all profits funding a programme of continued excavation and construction. The aim would be to provide residents with independence from state control.

"The scheme aims to create an economically independent zone to provide social opportunities for the community by re-establishing the community’s quarry," said Yiu.

"It intends to provide an alternative way of appropriating the current issues of commercialisation and tyranny. More importantly it is to give visibility to previously unrecognised social subjectivities."

The quarry would be extended into the hillside to form a large gash reaching all the way up to the more prosperous areas above, and therefore connecting them with the favela.

The resulting opening would be carved to create a variety of cave-like spaces reaching down towards the excavation site at the base. Yiu's diagrams show social spaces, offices for the quarry's managers, workshops for processing stone and an open-air museum incorporated into the design. 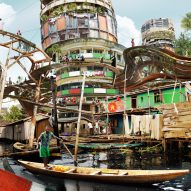 "The new vertical connection symbolises the reconciliation with the 'asphalt' city," Yiu claimed. "This process enhances the visibility of the people through their engagement with the carved spaces that are visible towards the more developed side of the city."

Excavations at the quarry would produce stone blocks that could be sold, with offcuts reused as building material elsewhere on the site. Even smaller chippings would be used as aggregate, while any dust produced during quarrying would be processed into material for 3D printing.

Additional structural ribs would be introduced to stabilise the excavated surfaces, while 3D-printed stone drainage elements would be incorporated at the top of the opening in the hillside to redirect rainwater.

The unit examines the political and environmental issues affecting cities and encourages students to focus on "translating experiences and explorations of social tensions into architectural form and ornamentation."

The brief for the 2016 graduates dealt with "neo-utopian organisations related to the image of the environment in contemporary cities". Students travelled to Brazil to gain an understanding of the key factors currently affecting the country's environment.

Yiu responded to what he sees as the stifling of important messages about environmental crises in the region, which results in a lack of awareness and action aimed at preventing these issues from escalating.

His proposal attempts to offer a tangible connection to the earth that allows people to spend time within it, rather than simply upon it.

"The project seeks to re-invoke the spirit of the people with their environment through spatial and sensational experiences," he explained. "Spaces are designed to evoke emotional expressions. The functionality of the spaces are set out and then adapted by the users allowing for contingency."

"The physical outcomes are permanently ingrained in the stone," he added, "yet its meaning is dynamic and redefined by generations; an alternative reality of human nature framed in the Portrait of Nature."

Other projects completed by this year's Bartlett graduates include Louise Bjørnskov Schmidt's proposal for an ecological education facility encircling a lake in a Panama rainforest, and a conceptual factory designed by Joanne Chen that is based on the Socialist ideals set out by designer and activist William Morris in the late 19th century.