Designer Daan Roosegaarde has installed the "largest smog vacuum cleaner in the world" in Rotterdam to help improve the city's air quality (+ movie).

Roosegaarde's Smog Free Tower was unveiled on 4 September 2015 at Vierhavensstraat 52, following a successful Kickstarter campaign to help fund the project.

The seven-metre-tall structure is designed to create a pocket of clean air in its vicinity, offering a respite from hazardous levels of pollution.

According to the designer, it processes 30,000 cubic metres of air per hour – removing ultra-fine smog particles and pumping out clean air using no more electricity than a water boiler. 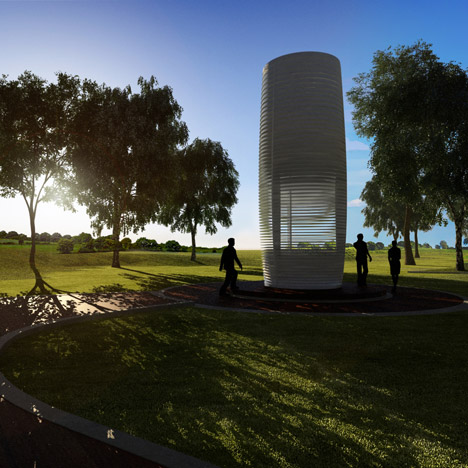 The smog is sucked in through its top, then the purified air is released through vents on the six sides. Its patented technology works in a similar way to air purification systems used in hospitals.

Air pollution frequently reaches hazardous levels in many cities across the world. Roosegaarde claims that life expectancy in the Netherlands is nine months shorter than it should be due to smog.

"We humans have created machines to enhance ourselves, we invented the wheel and cars to liberate ourselves and travel," said Roosegaarde. "But now these machines are striking back, making air extremely polluted in high-density cities."

After its stint in Rotterdam, the Smog Free Tower is due to travel around the world to cities including Mumbai and Beijing.

Roosegaarde is also making use of the collected smog particles – turning them into jewellery items.

The dust removed from 1,000 cubic metres of air is compressed and sealed within a resin cube, which is used as an embellishment for a ring or a cufflink.

Roosegaarde first unveiled a proposal for an "electronic vacuum cleaner" to remove smog from skies in 2013.