Technology company WobbleWorks has launched an updated edition of its hugely popular 3Doodler pen, which can now draw using materials like copper and wood composites (+ slideshow).

The pen uses a similar method to 3D printers, functioning like a hot glue gun to extrude lines of plastic-based filament that can be used to draw in the air. The material then cools and solidifies, forming stable structures.

The company hopes the new 3Doodler Pro will attract a new audience of architects, designers and other professional users hoping to create 3D forms and models.

The 3Doodler Pro pen works with a range of new materials, including polycarbonate and nylon. It also handles plastic-based composites of wood, copper or bronze.

The composites contain a high percentage of the "real" material, and can be sanded or polished after they've been extruded. 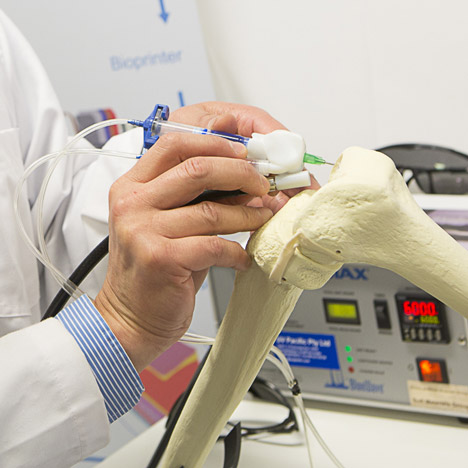 The 3Doodler Pro features dials that control temperature and speed, as well as a fan to give users greater control over how quickly the plastics cool down. An LCD display shows temperature indicators.

"When we started the 3Doodler journey back in 2013, we had world-leading architects telling us 'I want to do this'," said WobbleWorks co-founder and CEO Maxwell Bogue.

"'This' was a quick wave of the pen in the air, with plastic solidifying in its wake," he continued. "With new materials like polycarbonate, that dream is a reality."

The company has upgraded the pen's outer casing to a carbon-fibre shell, and created additional nozzles and a portable battery pack.

WobbleWorks also created a range of pieces to demonstrate the pen's possibilities, including scale architectural models, vase holders and lampshades.

A similar device – the Lix 3Dprinting pen – was also enormously successful on Kickstarter, raising over £400,000 in crowdfunding.

Its co-founder, Delphine Wood, described the experience of doodling in three dimensions as a step forward that would "change the way brains draw".

It also offers significant possibilities for medicine, and researchers in Australia have developed a pen that deposits regenerative stem cells onto damaged bone and cartilage to aid repair.

WoobleWorks has sold more than 750,000 versions of its pens – including a lighter version of the device launched in 2015.

The 3Doodler Pro is priced at $249 (£189), and will be available from the MoMA store, as well as Barnes & Noble, Macy's, Amazon and the 3Doodler Pro website.