The team behind a virtual reality tool that allows designers to sketch in three dimensions has launched an iPad app that turns drawings into virtual and physical 3D models (+ movie).

Tech startup Gravity Sketch released the app of the same name today, which can be used to create digital models for sharing, viewing with augmented reality, or 3D printing.

Gravity Sketch includes digital drawing tools that can be used with a finger or stylus to shape 3D images. The finished models can then be sent directly to a 3D printer.

It was developed by Royal College of Art graduates Guillaume Couche, Daniela Paredes Fuentes, Pierre Paslier and Oluwaseyi Sosanya, with the aim of making it easier to create 3D models for printing.

"As a team of designers working at the Royal College of Art, we used to get so frustrated with the existing software packages when it comes to 3D printing anything at all," said Sosanya.

The team previously created the transparent Gravity tablet device during their studies, which paired with a stylus for creating 3D drawings in midair.

These would appear in front of the rectangular acrylic sheet when viewed using augmented reality (AR) or virtual reality (VR) devices, such as an Oculus Rift headset. 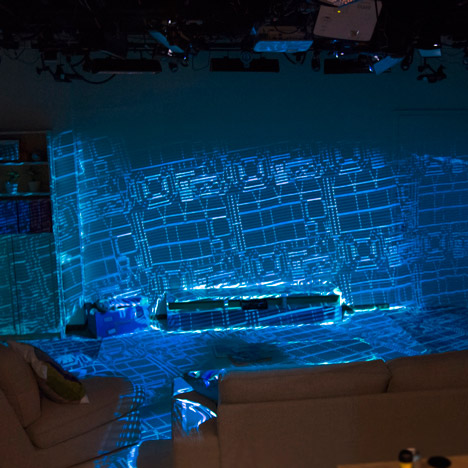 Microsoft's RoomAlive transforms any room "into an augmented interactive display"

This has been developed into the Gravity Sketch app, which is designed primarily for students and teachers.

"Gravity Sketch is on a mission to lower the barriers to 3D literacy, the ability to create and manipulate 3D content," said Paslier.

Models can be formed using combinations of various pre-programmed shapes, or drawing freehand along axes. The different tools and the interface appear similar to those found in Google's Sketchup modelling software.

Similar to the Gravity tablet, models created with the app will soon be possible to viewed use VR headsets or an AR smartphone or tablet app – which will present the 3D sketch floating above the screen.

Gravity Sketch has partnered with 3D-printing company Shapeways to enable digital models to be printed directly from the app, and shipped within two days.

"With the lowering price of 3D printing, and the rise of virtual reality, our team really believes that 3D literacy is the key to the future for science, creativity and entertainment," Paslier said.

In a movie filmed by Dezeen about the Gravity tablet in 2014, the team said that architects will soon be able to walk around inside 3D sketches of their projects and edit their designs as they go.

Tools developed to create physical 3D drawings include an implement that allows users to "doodle in the air" and a similar 3D-printing pen that draws in midair.