A copper-clad chapel and a faceted wooden sauna are among the four buildings competing for Finland's most important architecture prize (+ slideshow).

The Finnish Association of Architects has announced the projects on the shortlist for this year's Finlandia Prize for Architecture.

These four are: Lappeenranta City Theatre by ALA Architects; Löyly sauna, Helsinki, by Avanto Architects; the spectator stand at the Rovaniemi Sports Arena, Railo, by APRT Architects; and Suvela Chapel by OOPEAA.

Billed as the architectural equivalent of the prestigious annual Finlandia Prize for Literature, the award recognises the best new building either in Finland or by a Finnish architect.

The four shortlisted projects were selected by a jury chaired by Pirjo Sanaksenaho, who is head of research institute Sotera and a partner at Finnish studio Sanaksenaho Architects. 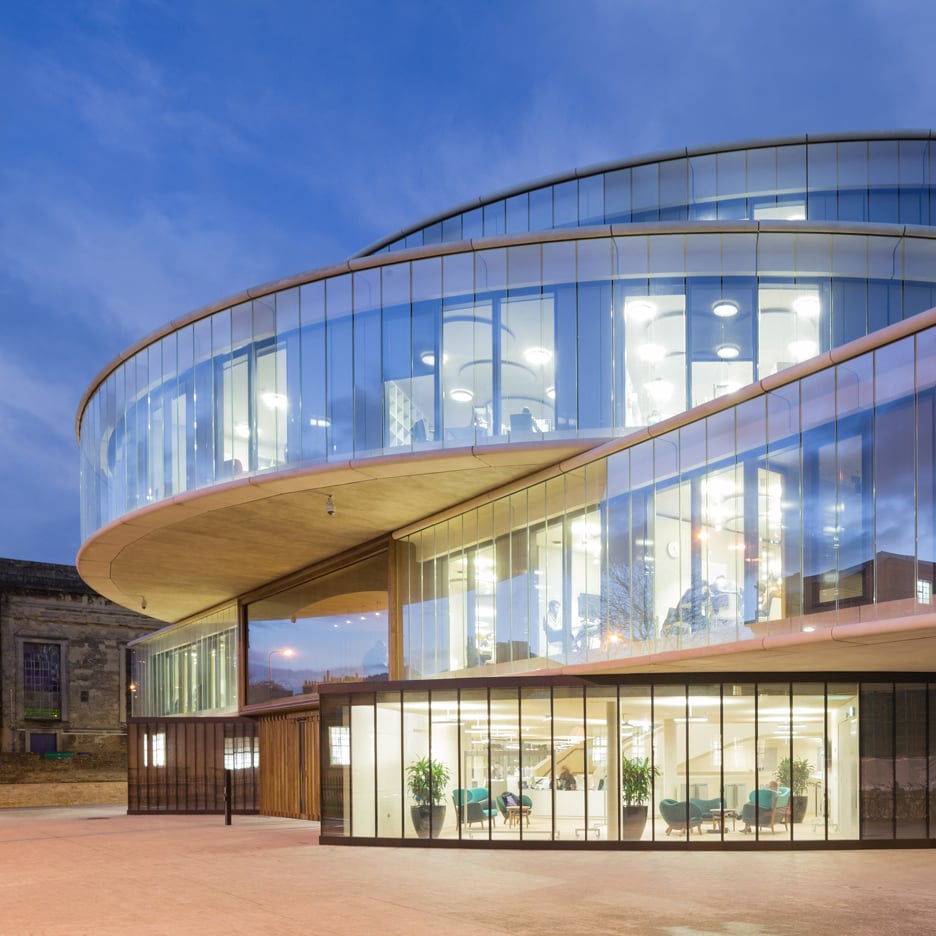 "What they have in common is that they all form a space for the public to spend time in – a church space, a sports venue, a cultural space and leisure time space," she continued. "In each of these buildings, architecture has been used to give them interest and personality within their respective environments."

The winner will be selected by former prime minister Paavo Lipponen and will be revealed at a ceremony in Helsinki on 13 October 2016.

This is only the third edition of the Finlandia Prize, which was launched by the Finnish Association of Architects in 2014 to promote the value of high-quality architecture.

Lahdelma & Mahlamäki Architects won the first prize with its Museum of the History of Polish Jews in Warsaw, while last year's winner was an innovative wooden apartment block by OOPEAA.

Read on for a short description of each project from the jury:

Lappeenranta City Theatre by ALA Architects

The Lappeenranta City Theatre is housed, unusually for a theatre, within a new extension of a shopping mall. The jury finds that the concept in which a large public building is housed within a commercial building ultimately creates an intriguing setting for a new type of theatre building to emerge.

The foyer of the theatre opens up towards the high central hall of the mall. The public spaces are furnished with dark monochrome and metallic surfaces providing a convincing contrast to the abundance of colour and information stimuli of the shopping mall.

Built on one level, the theatre centres around a tight group of large hall spaces. Its elegant simplicity raises the ambiance above and beyond the ordinary.

Löyly was erected in Helsinki’s Hernesaari district this year. According to the Pre-Selection Jury, few buildings in Helsinki that are open to the public make such full use of their location by the sea as Löyly does. The horizon is visible from almost all indoor spaces and the views can also be taken in from the roof.

The building is a mound clad in wooden lamellas that beautifully reflect the light thanks to their triangular profile. The wood used on the elevation will acquire a grey patina over time, so that, from a distance, it will look like one of the bare granite rocks emblematic of the Helsinki coastline. The slats provide discrete privacy to those using the saunas, while allowing a sea view from inside.

The spectator stand of the Rovaniemi Sports Arena, Railo, and the boulder-shaped residential and office buildings, once completed, will form a crevasse-like roadway winding between them.

The building is located within the so-called "Reindeer Antler" town plan designed by Alvar Aalto, near the town centre of Rovaniemi. The stand has a very different look depending on the direction from which it is viewed. When seen directly from the front, from the other side of the pitch, the structure looks like a lean and lightweight canopy supported by columns. The best view of the spectator stand is from a distance: a large-scale, statuesque sports arena.

According to the jury, the new sports arena and multipurpose building add a contemporary edge to the city’s high-quality architecture.

The Suvela Chapel creates a natural highpoint within its surroundings. Some of the spaces are used by the City of Espoo residents' park. The building also houses some facilities serving the residents’ park, making it a natural meeting point for people of all ages.

The building forms clear delineation for traffic routes around it and the yard area it encloses. The copper clad building extends from the ground over the roof and belfry, resulting in a sculptural impression. The interior of the main hall is powerful in its simplicity.