Architects office Studioplusthree has overhauled a traditional house in Sydney for a pair of musicians, adding a recycled-brick extension that features a projecting black steel awning.

Situated in the suburb of Marrickville, Llewellyn House is a typical example of the Federation style that was prevalent in Australia at the turn of the 20th century.

It was in a derelict condition when the owners asked Studioplusthree to transform into a modern, light-filled living and rehearsal space for its owners.

The architects began by removing the rear portion of the building to make room for a new open-plan living space that looks onto the garden.

The extension accommodates an open kitchen and lounge space. Glazing on two sides allows natural light to pour into the darkly furnished space.

A section of the new recycled brick wall is visible behind shelving built into the bespoke joinery that provides valuable storage in the compact space.

The extension's fully-glazed rear elevation incorporates sliding doors that open the space up to a wooden deck looking onto the garden.

A steel awning juts outwards from the facade to protect the interior from the harsh northern sun. The thinness of the 4.7-metre-wide sheet gives the impression that it is floating above the terrace.

"The dialogue between old and new continues by contrasting the roughness of aged, dry-pressed recycled bricks with glossy black steel," said the architects. 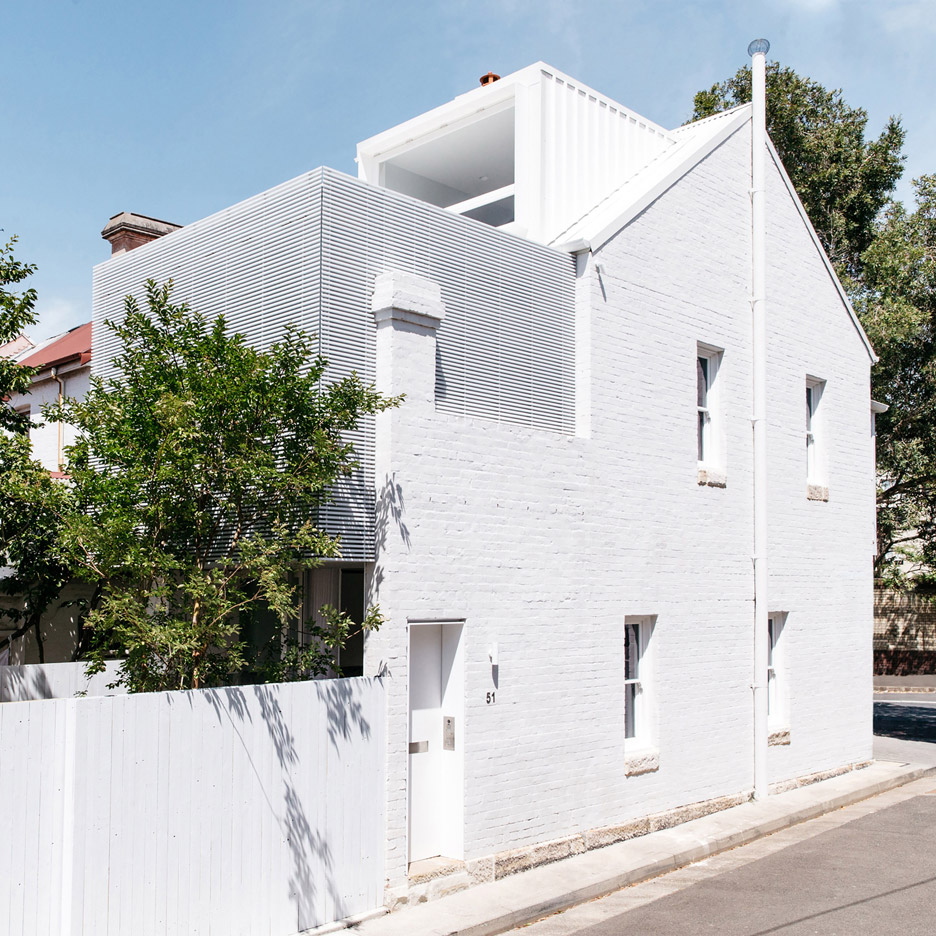 "In a minimal and modern interpretation of a traditional verandah, [the awning's] glossy surface reflects the garden into the house."

The decking extends along the house's side alley, where the introduction of another sliding door enables the kitchen to open out into this space and its newly planted border.

A number of repairs were made in the dilapidated and water damaged existing property, which had previously been divided into a series of dark and unattractive spaces.

The renovated bedrooms towards the front of the house are painted white, although they retain many of the original Federation-era features. They contrast with the dark material palette employed throughout the extension.

"A contrast of light and dark materiality is used to knit together old and new," added the team, who described the outcome as "a project united by contrast – at the same time rustic and slick, thin yet massive, dark and bright."

In each of the bedrooms, the repainted walls and ceilings are offset by black fireplaces and wooden flooring. The timber floorboards also extend along the corridor leading towards the extension.

A refurbished living room and bathroom occupy the space between the bedrooms and the new addition. The bathroom features a monochrome palette comprising white sanitary ware, black fittings and black and white tiles.

Sydney has many properties built in the Federation period, which architects are being asked to renovate for modern living.

Other examples include a house with a glass-walled living room built around a corner courtyard and a timber-clad extension to a traditional bungalow with a corner sliced off to accommodate a courtyard.