Japanese artist Yayoi Kusama has continued her residency at the iconic Glass House in Connecticut by sticking red polka dots all over its transparent walls (+ slideshow).

Dots Obsession – Alive, Seeking for Eternal Hope is a month-long intervention at the Modernist residence, which American architect Philip Johnson designed for himself in the 1940s.

The installation joins her temporary Narcissus Garden kinetic sculpture, which comprises 1,300 mirrored spheres that float on the small lake below the house.

A giant steel pumpkin is also installed elsewhere on the 49-acre (20-hectare) site.

At the house, the differently sized dots are spread across all four elevations and are visible both inside and out.

The intention is for visitors to "see the world through the eyes" of Johnson and Kusama simultaneously.

"My desire is to measure and to make order of the infinite, unbounded universe  from my own position within it, with polka dots," said Kusama, whose work has been dominated by dots since the 1950s.

"In exploring this, the single dot  is my own life, and I am a single particle amongst billions." 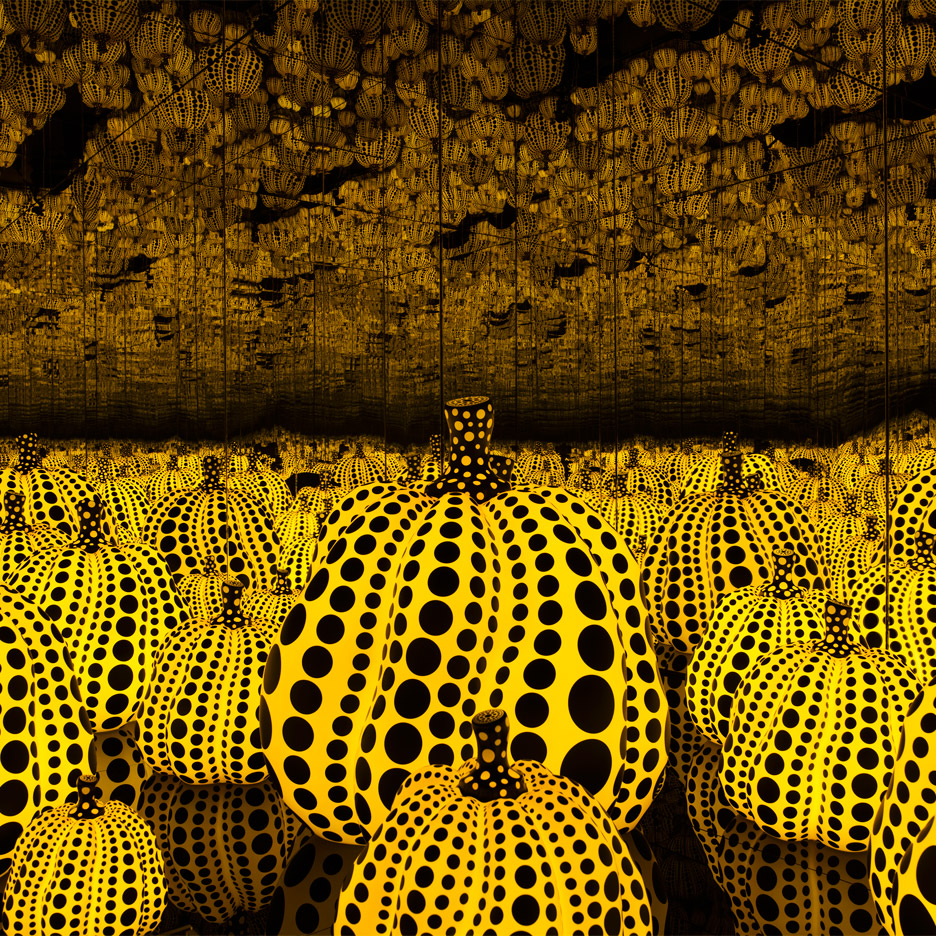 "I work with the principal themes of infinity, self-image, and compulsive repetition in objects and forms, such as the steel spheres of Narcissus Garden and the mirrored walls I have created," she added.

Narcissus Garden was first created 50 years ago for the 33rd Venice Biennale. It has been in place at the Glass House since 1 May 2016 and remains on view until 30 November 2016, while the dots will be visible until 26 September 2016.

Now a museum and gallery, the Glass House site frequently hosts exhibitions and installations by guest artists. In 2014, Fujiko Nakaya engulfed the house in dense clouds of mist.

Johnson, who died in 2005 aged 98, has featured in the news frequently this year.

Furniture from his revered The Four Seasons restaurant in New York was auctioned off in July – a move that was slammed by critics as the destruction of "one of the rarest phenomena in Modernism".

Proposals to revitalise his abandoned pavilion for the 1964-65 World's Fair in New York were revealed in August, while a book was published that revealed the 1979 Pritzker Prize winner was an impassioned supporter of Nazism in April.

Kusama's other recent exhibitions include a show at London's Victoria Miro galleries, which included a hugely popular mirrored room filled with yellow pumpkins, and a retrospective of her 60-year career at the Louisiana Museum in Denmark.

Photography is by Matthew Placek.