The first major exhibition at the new Design Museum in London will include 11 commissions by leading designers – including an EU-themed living room designed by OMA in response to Brexit.

Fear and Love – Reactions to a Complex World will open on 24 November 2016 when the museum unveils its new John Paswon-designed home inside London's former Commonwealth Institute.

Organised by the museum's new chief curator and Dezeen columnist Justin McGuirk, the exhibition will include 11 specially commissioned pieces that each tackle a different social issue.

"The exhibition shows how design is deeply connected not just to commerce and culture but to urgent underlying issues – issues that inspire fear and love," it added.

Dutch architecture firm OMA, which was founded by Rem Koolhaas, is contributing The Pan-European Living Room. This will be a mock living space that will be furnished with an item from all 28 EU member states and a huge blind made using OMA's proposed design for a barcode-style flag for the EU.

Designed in response to Brexit, the installation aims to show that "our very notion of the domestic interior has been shaped by an ideal of European cooperation and trade." 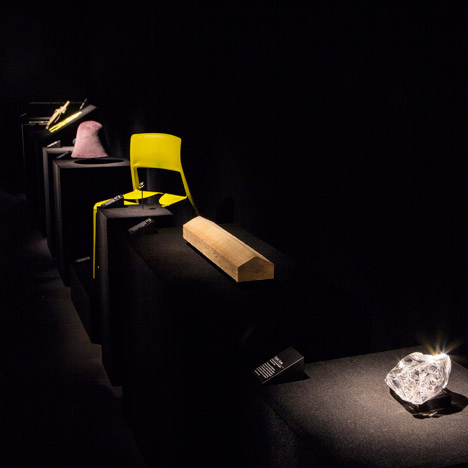 UK fashion designer Hussein Chalayan is contributing a series of wearable devices that will detect the emotions of museum visitors and project them into the surrounding space for a piece called Room Tone that will explore anxieties related to city living.

Japanese graphic designer Kenya Hara, who is currently the art director for Muji, is creating a display focusing on staple foods around the world and their importance in building ideas of cultural identity.

Architect, designer and MIT professor Neri Oxman, who is contributing a series of intricate 3D-printed death masks called Vespers for the exhibition, and architect Andrés Jaque – who created the most recent installation for the MoMA PS1 programme in New York – will construct an audiovisual installation.

Titled Intimate Strangers, it will explore the impact of dating apps and network technology.

US designer Madeline Gannon is also working with Autodesk to reprogram a large industrial robot to sense and respond to the presence of visitors to the exhibition, while Hong Kong-based Rural Urban Framework will explore the architectural potential of the yurt with an installation called City of Nomads.

"When the Design Museum opened in 1989, the first exhibition, Commerce and Culture, was about the value of industrial products," said McGuirk. "Three decades later, we now take that value for granted. Fear and Love goes further, and proposes that design is implicated in wider issues that reflect the state of the world."

"By inviting these designers to create installations with such an open brief, the museum presents itself as a laboratory of ideas, and a place for absorbing how the world is changing," he explained.

Exhibition participant OMA has been closely connected to the relocation of the Design Museum from an old factory in Shad Thames, south London, to the refurbished former Commonwealth Institute – an iconic 20th-century building in Kensington.

The firm designed three housing blocks around the protected building to help fund its transformation into the Design Museum's new home, with a completely new interior by minimalist designer John Pawson.

The relocation will allow the museum to host a display of its permanent collection for the first time alongside major exhibitions.