Unlike existing glass slides, such as Los Angeles's 70th-floor SkySlide, Eckersley O'Callaghan's Vidre-Slide is made using a single piece of laminated glass.

Another single pane of glass – this time with treads – is propped against the first to form steps leading to the top.

Glue and a steel base at either end of the slide are all that hold it together. This eliminates the need for extra mechanical fixings and creates uninterrupted views down through the slide.

Eckersley O'Callaghan worked with fabricators Cricursa to build the nine-metre-long slide as a test of emerging technologies that it could one day use in its architectural work.

"This is one of the ways in which we contribute to pushing the industry forwards." 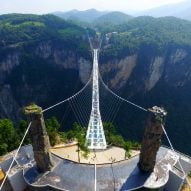 Eckersley O'Callaghan says the feat is made possible by the curved, semi-cylindrical shape of the glass. Structural silicone adheres the two large pieces together, while a transparent adhesive bonds the treads to the ladder.

The British firm exhibited the Vidre-Slide at the Glasstec trade fair in Düsseldorf, Germany, which ran from 20 to 23 September 2016.

Eckersley O'Callaghan's current architectural projects include the glass Sky Pool, which is expected to open in 2017. It will connect apartment blocks in London's new Nine Elms quarter, close to Battersea Power Station, at 10th-storey level.

The firm is working with architecture practices HAL Architects and Arup Associates on the project.

Eckersley O'Callaghan was founded in 2004 by Brian Eckersley and James O'Callaghan. Its more well-known projects include the glass stairways that are ubiquitous in Apple Stores.

A collection of men's eyewear for German brand Freigeist is among the firm's smaller works.