Three-dimensional shapes are cut out from areas of this artist residence in Upstate New York by Steven Holl Architects, which claims the house can sleep five guests despite having "zero bedrooms".

The geometry of the 918-square-foot property comprises a series of spheres that intersect the main trapezoid volumes.

These carved-out wooden shapes form a dramatic entrance hall and a large feature window on one corner of the upper floor.

Named Ex of In House, the project was created as a manifestation of Steven Holl Architects' research and development work titled Explorations of "IN".

"The house serves as an alternative to modernist suburban houses that 'sprawl in the landscape'," said the firm. "Instead, the Ex of In is a house of compression and inner voids." 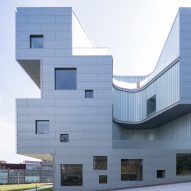 Holl frequently sculpts geometric voids – known as boolean voids – into his buildings, creating unusual facades and internal spaces across more simple base structures. He has used the technique in designs for a new wing for Mumbai City Museum and a pair of institutions in Tianjin.

The New York residence sits on 28 acres (11.3 hectares) of forested land in Rhinebeck, which was slated for five plots but has been joined to preserve the rural landscape as much as possible.

On entering the building, the first "orb of wood carved out of the house" is encountered. This small hall leads to a slightly sunken living room, which has a double-height ceiling that features a semi-circular skylight.

Behind the central staircase is a dining and cooking area, which opens onto a stone patio beside a reflecting pool.

Up the stairs is an open space marked as a bedroom on the plans. Behind a small bathroom is a hidden nook, where the back of the entrance sphere is expressed as a series of curved wooden steps.

A platform at the top is also designated as a potential place for a mattress, although the architects stated that the use of these upper-floor spaces for sleeping is merely a suggestion.

"There are zero bedrooms, yet the house can sleep five," said the firm.

The timber-framed house was made almost entirely from raw materials, which craft solid mahogany window and door frames, a mahogany stair and birch plywood walls.

Light fixtures were 3D-printed in PLA cornstarch-based bioplastic. The exterior is made from a recycled glass product called Poraver, which acts as lightweight insulating stucco.

The home is heated geothermally and powered using solar panels connected to a battery, meaning it is entirely energy independent.