This wooden beehive by Italian designer Francesco Faccin has a 4.5-metre chimney to keep its inhabitants away from children and vandals (+ movie).

Currently installed in the garden of the Triennale design museum in Milan, the Honey Factory houses a traditional beehive and all the equipment needed to process the sweet liquid the bees produce from nectar.

Faccin designed the structure to protect the hive from bad weather, and to keep it at a constant temperature with optimal ventilation.

"It can be considered as a real micro architecture that leaves a mark in the urban landscape where it's placed," he said.

Built around a steel frame, the four-sided hut has a parallelogram plan that tapers inwards slightly towards the side where the mono-pitch roof is highest.

Its tall shape allows the "flight step" – the point from which the bees take off – to be raised high above the ground, out of the way of anyone who might harm the insects.

"The big 'chimney', which is a clear sign of the project, helps to keep the entrance of bees far possible from children and possible vandalism," said the designer, who has previously created a manual fire-lighting kit and the interior for a Milanese restaurant.

The project also aims to promote the idea of urban beekeeping and provide information about its environmental benefits.

A door in the back features metal-mesh panels and the front has a thin window, so passersby can watch the bees and the beekeeper at work inside.

"Honey Factory will play a role of educating and allowing citizens to approach a complex and fascinating world of insects, observing them, listening to the bee buzz," said Faccin.

"Through a processing of materials, bees create a rich, comprehensive and sustainable food without reworking, comes directly from the producer to the consumer."

There has been a recent push from the design community to increase efforts to protect the welfare of bees and encourage them to live in cities. Snøhetta installed a series of wooden hives in Oslo, while Bettina Madita Böhm designed a cylindrical concrete beehive for urban beekeepers to use on rooftops. 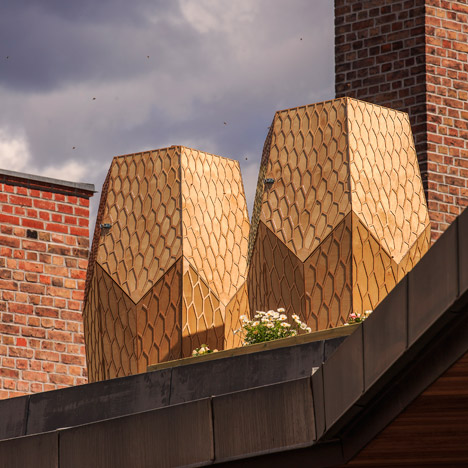 A team of architecture students from the University at Buffalo went as far as constructing a skyscraper for a colony.

For his project, Faccin worked with beekeeper Mauro Veca to design an optimal habitat for the bees.

"I was able to work starting from accurate and reliable information, which is a key condition for an experimental project but scientifically correct," the designer said.

Italian furniture company Riva1920 produced the prototype Honey Factory for its preview at the Satellite exhibition for emerging designers, which took place as part of this year's Salone del Mobile furniture fair in Milan.

It was then moved to the Triennale for a six-month residency to coincide with the city's Expo 2015, which is themed around ideas for sustainable food production and farming. The museum is hosting an exhibition about the relationship between art and food to coincide with the event.

At the main Milan Expo site, the British pavilion is shaped to reference the honeycomb structures found in beehives, and presents visitors with information about the lifecycle of bees and their role in pollinating food crops.

Photography is by Delfino Sisto Legnani. Video is by Mario Greco.